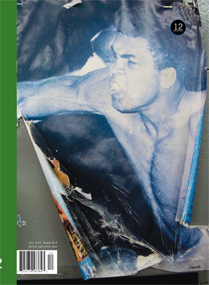 CalArts isn’t generally thought of as a sports powerhouse (although the football team remains undefeated!*) but the latest issue of Black Clock (#12) takes on the subject of athletics and brings readers “out to the ball game, where obsessions abound inside and outside the white lines.”

Edited by CalArts Critical Studies faculty member Steve Erickson, the Black Clock literary journal is published semi-annually by CalArts Arts in association with the Institute’s MFA Writing Program. The stories, essays and poetry found in the issue are from voices both new and familiar including Carolyn Kellogg (“Stroke”), Paul Cullum (“Why I Hate Sports”), Richard Peabody (“Shirts and Skinjobs”), David L. Ulin (“Member of the Tribe”) and Lisa Teasley (“Beach Volleyball is Church.”)

Here’s an excerpt from Tod Goldberg’s “Welcome to Thousand Palms,” a mediation on one not-quite-good-enough golf pro’s life:

A distinct advantage of being the golf pro at Terra De La Paz was that whenever he wanted to, Kip Lewin could turn on the tournament lights at the course and play a round in the middle of the night. And sure, maybe a few of his neighbors might complain the next day about it being lit up like Dodger Stadium all night long — which is why he didn’t extend the courtesy to the gardeners on a daily basis — but so what? It was silly that Terra De La Paz even had tournament lights as it was an extravagance not even real courses like Pebble Beach or Augusta had. Real golf courses and real tournaments simply stopped play when the sun went down. And it was not as if Terra De La Paz even stayed open for night golf since most people were afraid to venture into Thousand Palms after dark except to go to the In-N-Out Burger off I-10, since even gangsters, crooks and tweakers respected the sanctity of In-N-Out Burger.

Excerpts from Black Clock 12 can be read online. The issue can be purchased at these local area bookstores and online in both print and PDF format. Peanuts and Cracker Jack not included.

*CalArts does not have a football team.