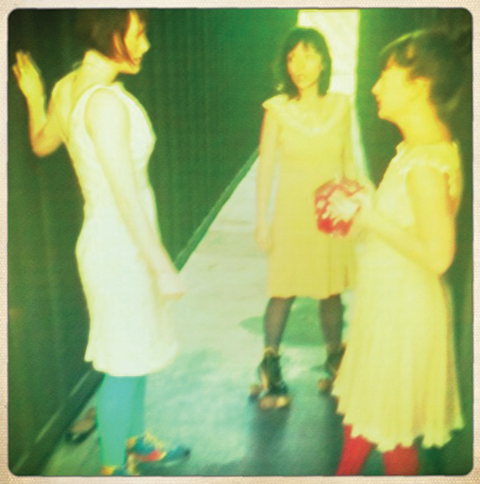 'La (Ir)résistance' benefit on Thursday night will raise funds to help cover the costs for five CalArts students (and one alum) traveling to the Edinburgh Festival Fringe in August.

The Edinburgh Festival Fringe is one of the most prestigious arts festivals in the world, showcasing theater, comedy, dance, physical theater, musicals, operas, music, and more. At Sundown, a theater piece collaboration among members of CalArts’ Schools of Theater, Critical Studies and the Herb Alpert School of Music, was selected by the festival to represent the Institute in August. The work will premiere at the festival before returning for the U.S. premiere in Los Angeles next fall.

A brief description of the piece from www.atsundown.net:

‘Sundowning’ is often experienced by people with dementia or Alzheimer’s. This syndrome causes agitation and hallucinations during the daily cycle, especially as the evening approaches.
…
At Sundown is the story of the end of our lives told in our youth. A collectively imagined autobiography about the unraveling of memory. A joyous physical theater collage about clinging to the past and letting it go.

As one can imagine, traveling to Edinburgh from California is no cheap feat, especially for students. So, the company is holding a benefit tomorrow evening (starting around sundown), with proceeds contributing to the group’s expenses.

The event, La (Ir)résistance: A Benefit Spectacle for Edinburgh-bound ‘At Sundown,’ will feature food, drink, theater, dance, music, magic, a kissing booth, photo booth, fortune telling and raffles. Hosted by The Bootleg Theater in Los Angeles, the event starts at 7:00 pm with a Cocktail Fête, and continues with a special performance of the Brimmer St. Theatre Co.’s Leiris/Picasso at 8 pm. Aprés Show Spectacle, set to begin at 10:30 pm, will include repast provided by The Gastrobus, burlesque dancing from Danse et Burlesque as well as musical performances by Rev Juli Crockett and the Evangenitals, the Bulgarian Moonshine Co., the Action Jackson Twins, indie rockers Nadine et Terrence, and more.

Here’s a little taste of the Bulgarian Moonshine Co., led by performer-composer Milen Kirov (Music DMA 12), to wet your beaks: