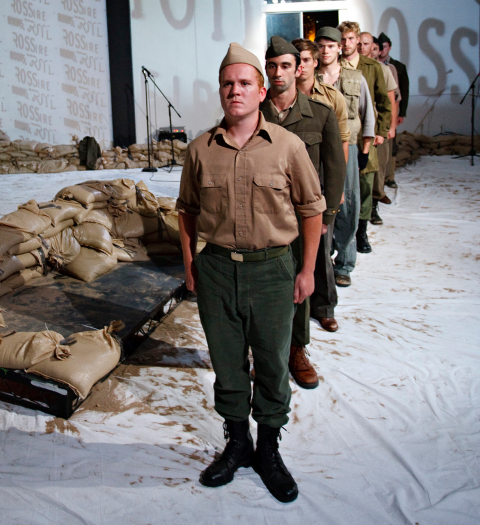 For many men and women of the armed forces, returning to civilian life after living in a war zone can be both challenging and difficult. That’s the theme of Brewsie and Willie, a world premiere stage adaptation of Gertrude Stein’s post-World War II novella. The production, staged by CalArts’ Center for New Performance (CNP) in association with Poor Dog Group, opens with a preview on July 14th and runs Wednesdays through Sundays until August 1 at the 7th Floor Penthouse in Downtown LA.

More on the production from calarts.edu:

In timeless fashion, Brewsie, Willie and an array of other soldiers and nurses exist in limbo bracketed by the end of the war and their return to civilian life. This period of aimless rest and relaxation becomes a space of rambling reflection and the progenitor of a vast, indescribable anxiety.

The Poor Dog Group, an experimental theater company of recent CalArts alumni, is the core performing ensemble of the production. The group joined forces with CNP, the professional producing arm of CalArts, in bringing Stein’s piece to the stage:

This exploration of Stein’s work exemplifies CNP’s and Poor Dog Group’s shared interest in developing original theatrical expression through radical reexaminations of existing texts. A closely knit ensemble, the group is uniquely suited to recreate the intimacy found among young soldiers. The fragility of their position as emerging artists is echoed in the vulnerabilities of Brewsie, Willie, and their fictional compatriots.