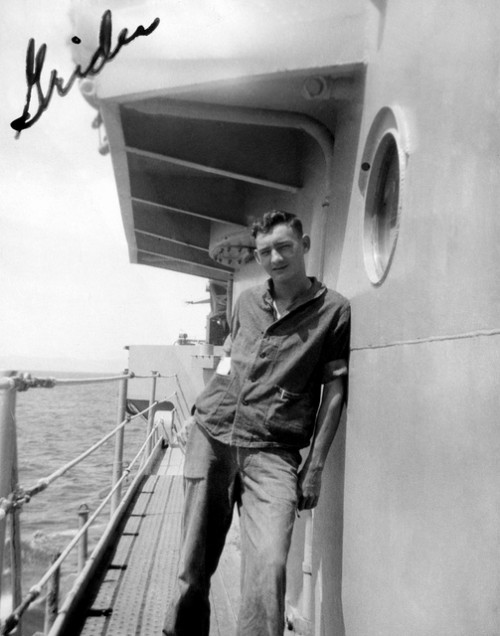 Three exhibits opened this past weekend at Angels Gate Cultural Center in San Pedro, Calif., and include the portraiture work of photographers Slobodan Dimitrov, Camilo Cruz and CalArts alumnus Nicholas Grider (Interschool BFA 08). The subjects of these exhibitions range in subject matter, but are united in the exploration of “individuals that often go unseen.”

The second set of portraits, nearly the opposite of Soldiers in terms of its scope, is called A Sailor and consists of portraits of the artist’s father taken by fellow sailors while he served in the Navy during the Korean War. These small black and white portraits, overlaid with the text written on the back of the originals, allow room for a loose narrative of what life during wartime was like for the artist’s own father sixty years ago and provide a historical counterpoint to the full-color, up-close contemporary portraits from the series Soldiers and Marines.

In Artists Portraits, Dimitrov captures artists as workers. The Cultural Center commissioned the labor photographer in 2006 for an ongoing project to document artists working and exhibiting in the Harbor Area. The 150 prints included are executed in large format, Polaroid Type 55 Black and White Film.

Cruz documents the humanity found within the Los Angeles Superior Court system in Theater of Souls. He brings an insider perspective to this body of work since he’s an employee of the LA court system and has witnessed “people at the mercy of system driven attorneys; toddlers crawling unattended on marble floors; sheriff deputies flirting with teenage girls.”