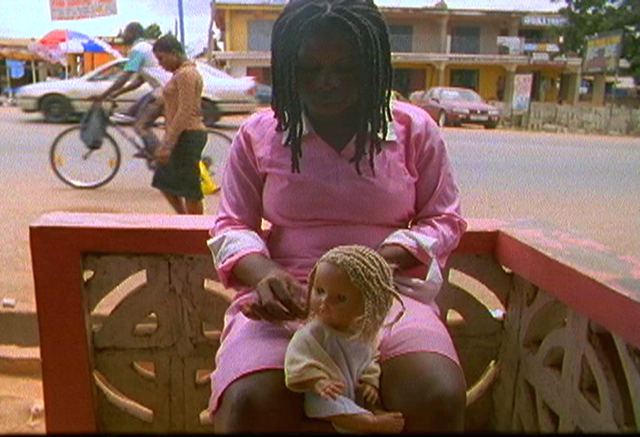 The 22-minute film pays tribute to Owusu’s Ghanian-American heritage. The title refers to the Ghanian tradition of women practicing braiding on “white babies,” generally dolls discarded from the West.

Here’s a description of Me Broni Ba from the film’s website:

Me Broni Ba is a lyrical portrait of hair salons in Kumasi, Ghana. The tangled legacy of European colonialism in Africa is evoked through images of women practicing hair braiding on discarded white baby dolls from the West. The film unfolds through a series of vignettes, set against a child’s story of migrating from Ghana to the United States. The film uncovers the meaning behind the Akan term of endearment, me broni ba…’

“It’s partly a travelogue and partially autobiographical,” said Owusu during a recent phone interview. “The story was appropriated–okay, stolen–from my sister’s childhood journal.”

When her sister arrived in the U.S. from Ghana as a child, she was fascinated by the hair of white children and would sometimes get in trouble for touching their hair. “These children looked like the white dolls she would play with.”

While Owusu doesn’t have a tried and true formula for festival success, she does say that persistence and passion are two key ingredients. “I had about 40 rejections,” she said. “Most people give up after 10. I just set aside paychecks to keep on applying for festivals.

“I really had no idea where my film would fit in, and I got rejected from African film festivals–which I thought were shoe-ins, but then I started getting accepted at some of the larger festivals.”

For more information on Me Broni Ba and upcoming screenings, please visit the film’s website. Here’s the trailer: