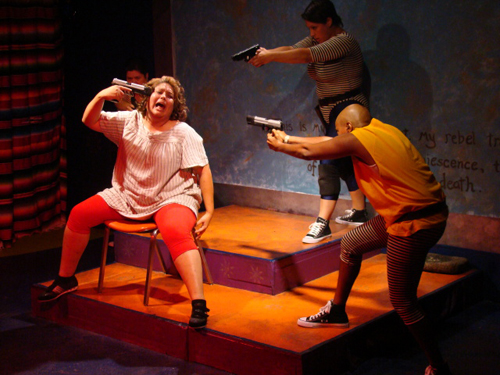 'Digging Up the Dirt' will run Fridays, Saturdays, and Sundays through August 29.

The world premiere of Cherríe Moraga’s murderous play Digging Up the Dirt opened last week (July 30) at  Breath of Fire Latina Theater Ensemble in Santa Ana, Calif. Presented in collaboration with See-what Productions, the play’s month-long run is being directed by Moraga and Adelina Anthony and features several CalArtians both on and off-stage.
Breath of Fire, led by Artistic Director and CalArts alumna Sara Guerrero (Theater BFA 99), is a company that supports the work and enriches the lives of Latinas in the visual and performing arts. Digging up the Dirt presents themes of poetry and perversion; making love and art; and that old story of loving to death through a decidedly Latina prism.

From Breath of Fire Theater Ensemble:

In Digging Up the Dirt, the plot thematically interweaves two murder stories. One is the tale of “Sirena Cantante’s” murderer, “Josefa Zanzibar,” serving a life sentence, while engaging in lesbian romances and being mercilessly visited by the probing “Poet.” The second is an intimate account of the murder of “Amada,” a Chicana lesbian killed by the hand of her own son. Through the telling of both stories, alternately satirical and tragic, audience members are held accountable for their own “crimes of passion” and the play becomes a kind of moving mirror to all our unacknowledged “murderous” deeds of the heart.

The production will feature two CalArts alumni, Virginia Grise (Theater MFA 07) and Anthony Castillo (Theater MFA 11), as the leading roles of “Poet” and “Zanzibar,” respectively. Grise, who is also an emerging playwright, recently won the 2010 Yale Drama Series Award for her play, blu. For this project, she is an artist mentee to Moraga, a relationship made made possible by Master Artist Grant through the National Association for Latino Arts and Culture.