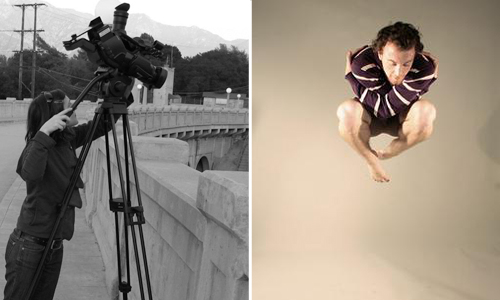 Congratulations! The Princess Grace Foundation which recognizes the talents of artists in theater, dance and film, just announced its awards for 2010, and students Andrew Wojtal (Dance BFA 11) and Laura Kraning (Film/Video MFA 11), along with alumni Virginia Grise (Theater MFA 09) and Chi-wang Yang (Theater MFA 07) are among this year’s awardees.

In November, the CalArtians will join their fellow recipients in New York for what must be one of the most glamorous arts award events around–the annual black-tie Princess Grace Awards Gala, presided over by Her Royal Highness Princess Caroline of Hanover.

The Princess Grace Foundation-USA awards scholarships, apprenticeships, and fellowships to assist artists at the start of their careers.  The awards will help students, Wojtal and Kraning, to focus on their work and final projects during the last year of their degree programs.

Kraning, a filmmaker whose work blurs documentary and experimental film, received a scholarship and the John H. Johnson Film Award. Her thesis film, Devil’s Gate explores the metaphysical undercurrents of a Southern California landscape scarred by fire. She plans to use her award to acquire the tools needed to complete shooting and editing her film, and cover finishing costs. When Kraning begins work on the soundtrack in the fall, improved stereo sound equipment will “help to achieve a complicated soundscape comprised of field recordings from around the site of Devil’s Gate Dam, which is the oldest flood control dam in Los Angeles County, and the surrounding Arroyo Seco.”

Wojtal’s scholarship will support his final undergraduate year in The Sharon Disney Lund School of Dance. His most recent dance composition, Hanoi, which he described as a “piece about family history, lineage and the marks we leave behind,” premiered at CalArts last year.  He is currently spending the summer performing with the Island Moving Company, in Newport, Rhode Island.  About the awards he commented, “along with the scholarship, the Foundation offers opportunities for the future, qualifying me to apply for special projects grants later on.  I feel like it has changed my life.”

Over the years, many CalArtians have received awards from the Princess Grace Foundation.  Read about the 2009 recipients, Dawn Marie Stoppiello (Dance BFA 89) and Lily Whitsitt (Theater MFA 10).