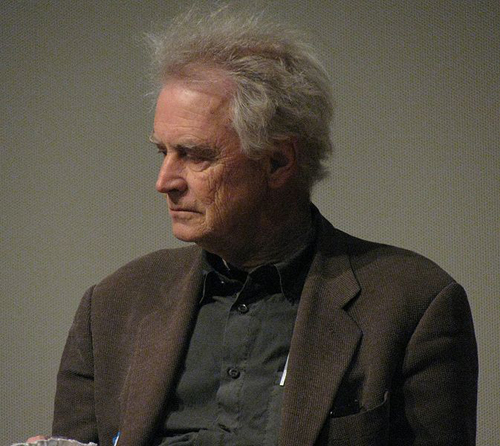 Program in Film & Video faculty and former program director Thom Andersen was in Switzerland last week, premiering his new film, Get Out of the Car (2010, 34 min., 16mm) at the Locarno International Film Festival–one of Europe’s most prestigious. Shot in the streets of Los Angeles, the film responds to Andersen’s own award-winning documentary Los Angeles Plays Itself (2003), by recording the city’s most evanescent signs, memorializing some of its vanished monuments and a golden era of its music.

At the close of his comprehensive commentary on the new work, Andersen writes:

…It’s also a sad film, some people say. I presume they understand Spanish. Then it is a just film, because the world we live in is sad, but, as Jonathan Tel has written,‘Great cities are tough; their ugliness is inseparable from their sexiness.’ (Tel 2010:21.) [sic]. Los Angeles is certainly tough and certainly ugly when seen in medium shot or long shot. But Roman Polanski once suggested it has another kind of beauty: ‘Los Angeles is the most beautiful city in the world—provided it’s seen by night and from a distance.’ Get Out of the Car proposes a third view: that Los Angeles is most beautiful when seen in a close-up and that its sexiness is not to be found where most tourists look.

In addition to Locarno, Andersen’s Get Out of the Car will screen at international festivals in Toronto, New York, London, Vienna and Vancouver, as well as at REDCAT in November.

Last February, Los Angeles Plays Itself was named one of the top 50 best films of the decade by Film Comment‘s poll of international critics.