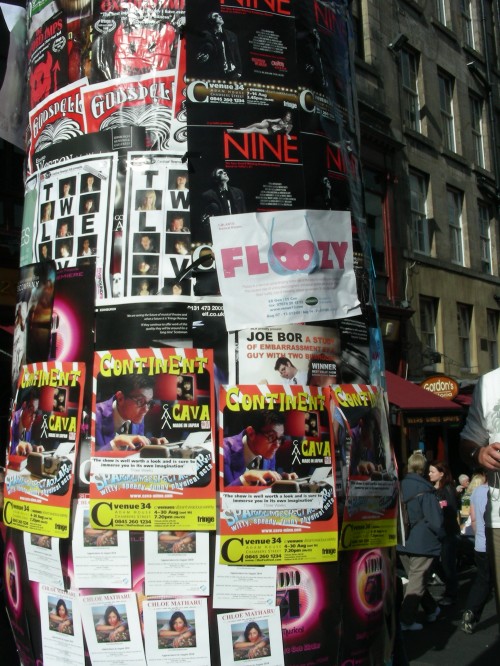 Ed. Note: Composer Ellen Reid (Music MFA 11) is at the Edinburgh Fringe Festival this month with a contingent of CalArtians involved in various works at the festival. She’ll be blogging from Edinburgh and introducing 24700 viewers to the CalArts’ productions. Here’s the first post in the series.

The streets of Edinburgh, Scotland, which can feel dreary and desolate during the cold, winter months, are currently bustling with art makers and art lovers who have traveled from all over the world to the Edinburgh Fringe Festival (Aug. 6-30). The festival, which started in 1947 as an alternative to the Edinburgh International Festival, has sprouted into one of the largest performing arts festivals in the world.

Music, opera, theater, dance, comedy, puppetry and everything in between come together in this medieval cobblestoned city for three weeks every August. This year, the CalArts School of Theater has contributed five different pieces to the Fringe Festival.  These pieces create a diverse line-up which features the work from current students and recent alumni.

One of the CalArtian works at the Fringe is Silken Veils, written and performed by Leila Ghaznavi (Theater MFA 10), and features Evan Hyde (Theater BFA 11), Cady Zuckerman (Theater MFA 10) and Warren St. George II (Theater BFA 12). Silken Veils has received the honor of being nominated for a Fringe First Award, an award given by the Scottish national paper, The Scotsman. 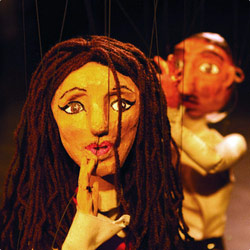 Silken Veils at the Edinburgh Fringe

Ghaznavi made a commitment to herself that she would bring a show to Edinburgh this summer. Throughout last year she developed Silken Veils at the O’Neill Puppetry Conference, the CalArts Coffee House Theater, the Hollywood Fringe Festival, and now she’s getting feedback from audiences in Edinburgh.  And the feedback is glowing.

Silken Veils deals with Iranian/American identity, and it has greatly benefitted from being shared with an international audience. “At CalArts the shows run three or four days. This type of longer run allows us to develop each step [of the story] and to flesh it out,” says Ghaznavi.

St. George explains that the enthusiasm of the people around the Fringe has allowed the cast to be more daring in their creative choices, knowing that they’ll be supported. He adds that the actors and creators in Silken Veils have been able to mature and deepen in their understanding of the piece, and the tremendous feedback from reviewers and the public has also allowed them to deepen in their understanding of themselves as artists.

Floozy, written by Amy Tofte (Playwriting MFA 11), is another CalArtian Fringe production. Here’s a brief description of the play, from the Fringe Festival:

Between farcical comedy and spine-tingling horror exists the space for a young woman’s pursuit of love and human connection; even if for only one night, and with the totally wrong person. Five characters smash together in this bizarre tale of unrequited judgment, sexual appetites and devoted love…

The play originally clocked in at about 90 minutes, but Tofte realized that in order for it to get to Edinburgh, she needed to significantly cut the script to be under an hour. Determined, Tofte did it, “because everyone cool comes [to Edinburgh] eventually,” she adds with a laugh.

The cuts and proved to be a positive move, yielding a tighter story and helping to clarify what is absolutely necessary to the piece, Tofte explains.

Actor Evan Hyde, who is in three out of the four CalArts productions (including both Floozy and Silken Veils), pointed out how the Edinburgh festival audience is significantly different than a CalArts audience of friends and peers. “Here you sink or swim,” says Hyde.

While the experience in Edinburgh has allowed many of the CalArtians to wed their interests in theater and travel, Zuckerman also credits her time at the Fringe Festival for helping her “come into my own as an actor and the opportunity of not having to explain why I’ve decided to devote my life to such a profession.”

Stay tuned for more updates from the Fringe.