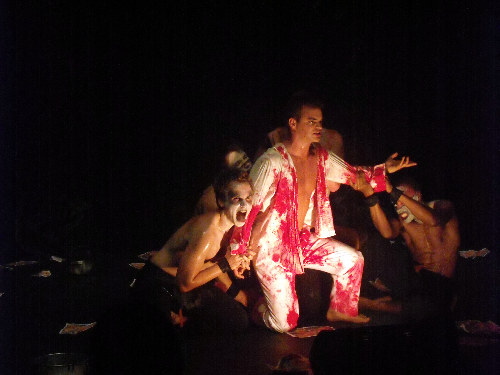 A scene from 'The Bacchae' at Edinburgh Festival Fringe.

Ed. Note: Composer Ellen Reid (Music MFA 11) is at the Edinburgh Fringe Festival this month with a contingent of CalArtians involved in various works at the festival. Reid contributed to this piece from Edinburgh to introduce 24700 readers to the CalArts’ Fringe productions.

The Bacchae, adapted, conceived, and produced by Allain Rochel (Theater MFA 01), puts an all-male spin on Euripides’ classic Greek tragedy. Rochel’s Bacchae is more than sexual–it’s hyper-sexualized tone sets out to challenge perceptions of what it is to be gay, regardless of whether or not the viewer is attracted or repulsed. (Judging from the number sold-out shows, audiences seem to be more attracted than repulsed.)

According to Rochel, The Bacchae was originally inspired by the gay marriage debate during the 2004 presidential elections.  Here, the irresistible force, Dionysus (the god of hedonistic pleasure), is set against an immovable object, Pentheus (the buttoned-down ruler who refuses to worship him).  “It’s the story of a man’s inability to come to terms with his homosexuality, and his subsequent destruction,” says Rochel.

Rochel first visited the Fringe Festival in 2005 with CalArts, and was inspired to come back to Edinburgh with his own show.  He chose The Bacchae to use the opportunity to re-examine the piece in an international context.

Also working with Rochel on the production is third-year BFA lighting designer Zach Moore, who originally came to Edinburgh to light another CalArts production, Silken Veils. “I also designed Floozy and The Bacchae for Edinburgh because of circumstances,” says Moore. “I learned a lot about how to trust my collaborators and myself. I had only a few hours to figure out a new space and create a design for both of these pieces. It was a challenge, but turned out great!”

“This project was originally conceived as a piece for a festival. We made it with Edinburgh in mind,” says Merkel, a third-year MFA student. “The festival provided us an opportunity to collaborate on a non-curricular project.”

Hoke makes the point that, “There’s no built-in audience here (opposed to at CalArts), so people’s reactions vary a lot. There are always 20 million other things you could be doing/seeing at the same time.”  The response and feedback from the festival in Edinburgh is very different from the criticism that work at CalArts engenders.

Loeb, a second-year BFA actor, adds that the Festival has been quite a learning experience. “For me, the urgency of getting an audience to come and to stay has affected the piece. There are higher stakes here and a sense of urgency.”

At Sundown closed on Saturday with a packed house and a positive response from the audience. For a piece that deals with a topic as dark as Alzheimers, this positive response speaks highly of what the production was able to convey.