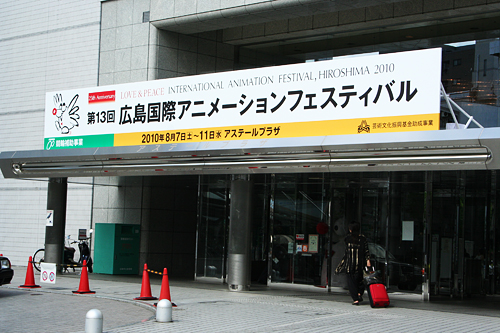 The International Animation Festival in Hiroshima, Japan, is now in its 25th year.

The Hiroshima International Animation Festival, one of the most respected international animation festivals (along with Annecy, Ottawa and Zagreb festivals), took place earlier this month from Aug. 7-11. The festival welcomed CalArts as the first non-Asian retrospective for its Education Marketplace program.

“We were invited by Festival Director Sayoko Kinoshita, who co-founded the festival with her [late] husband Renzo,” said Steve Brown, adjunct Character Animation faculty member, who represented CalArts at the festival. “One of Renzo’s most famous and moving films was Picadon (1978), an animated work about the bombing of Hiroshima.”

Now in its 25th year, the festival is held biannually during the anniversary of the Hiroshima bombing during World War II. The site was chosen specifically to call attention to peace and unity through the arts.

At the festival, Brown introduced the audience to CalArts, its history and the origins of the complementary Character and Experimental animation programs. “It was a very focused audience with young Japanese people surveying their options for their animation schools,” he said.

Throughout the presentation, he screened student films from both animation programs. (Films screened are listed below.)