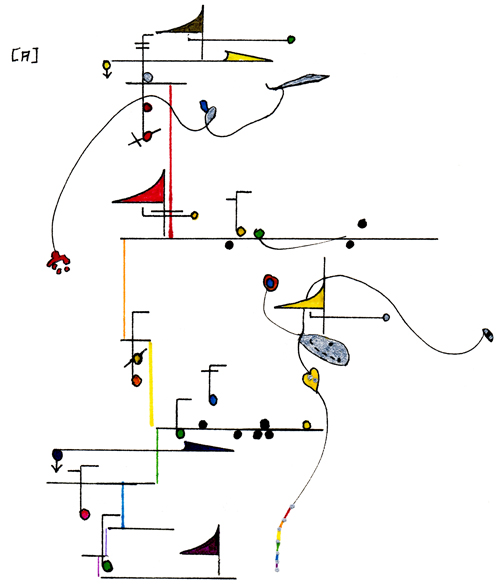 An example of a graphic score by Wadada Leo Smith. 'Seven Heavens' (2005).

The Society for the Activation of Social Space through Art and Sound (SASSAS) is hosting a concert on Saturday (Aug. 28) in West Hollywood that features compositions by renowned jazz musician and faculty of The Herb Alpert School of Music at CalArts Wadada Leo Smith.

On the program are a number of  CalArtians playing three works by Smith for guitar and saxophone quartet, including the new composition, “Ten Thousand Cereus Peruvianus’: A Memorial for Dorothy Stone,” commissioned by SASSAS to celebrate the relationship between the organization’s experimental music concert series and the city of West Hollywood.

The commissioned piece Smith is premiering is a memorial work for Dorothy Stone, the virtuoso flutist and co-founder of the California EAR Unit who passed away in 2008 at the age of 49. The twelve minute work for guitar–performed by [CalArts faculty] Stuart Fox–is a solo work built around complex sounds and structural improvisation.

Stone received her MFA in 1982 from CalArts where she studied composition with Stephen Mosko, Mel Powell, Leonard Stein and Morton Subotnick.

Below is a structured improvisation piece by Anderson from 2009, titled Light, which was greatly inspired by Smith, and used his graphic notation system (illustrated above). Performed by Anderson on soprano saxophone and Phil Rankin (Music MFA 13) on piano.