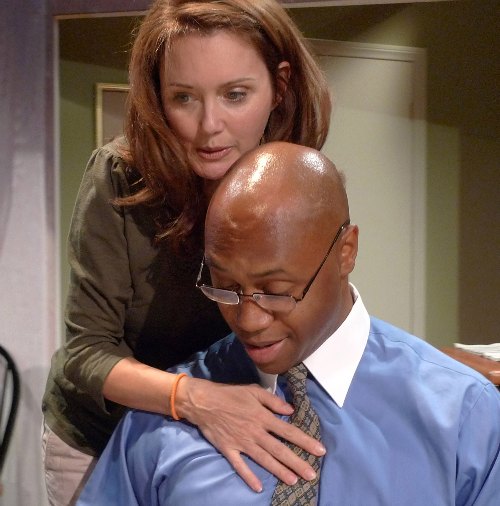 Neighbors, a play by Branden Jacobs-Jenkins, had its West Coast premiere at The Matrix Theatre in Hollywood last week. Directed by Nataki Garrett, newly appointed associate dean of CalArts’ School of Theater, the production tackles an often-touchy subject: race relations in America.

Richard Patterson, played by CalArts alum Derek Webster (Theater BFA 93), is an academic married to a white woman. Their mixed-race daughter is being educated in private school. While Patterson is an upwardly mobile African American, the Crows–a family of black actors who move in next door–are decidedly not.

Jacobs-Jenkins introduces the Crow family first to the audience. The five family members wear black face and dress in cartoonish versions of plantation clothing; they are clowns, from the oversized Aunt Jemima get-up of Mammy (Baadja-Lyne) to Topsy’s (Daniele Watts) nappy bush of a hairdo and Sambo’s (Keith Arthur Bolden) jungle garb. That’s just the start. The references — some visual, some oral — reinforce every black stereotype from watermelon and fried chicken to insatiable sexual appetites to a disregard for formal education. None of it is ironic.

In an interview with Southern California Public Radio, Garrett, who also serves as the co-artistic director for Blank-the-Dog Productions, a Los Angeles/New York based ensemble theater company, addresses these controversial racial and sexual stereotypes in Neighbors.

“I think, in this country in particular, sex and race are intertwined,” says Garrett. “And the play talks about the fears of misogynation [sic], black men and white women coming together, in a very graphic, sexual way. I feel that is the nucleus of racism in this country – that it comes [from] these very real fears over what would happen if people were allowed to step outside of these boundaries.”