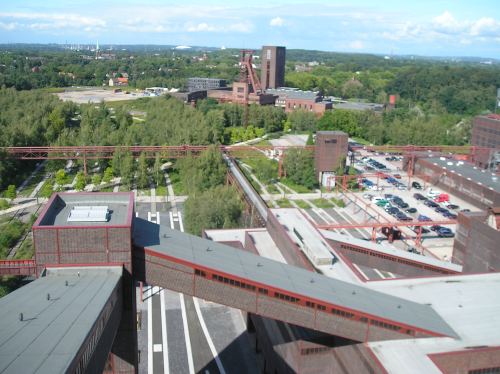 Arne De Boever, a faculty member in the School of Critical Studies and the Aesthetics and Politics program at CalArts, recently returned from a nearly two-week fellowship in Essen, Germany, where he participated in a number of workshops and seminars, and also spent time laying some of the groundwork for the upcoming CalArts in Europe initiative.

We did a Q&A with De Boever via e-mail, in which we discussed his fellowship in Essen, CalArts in Europe, and the location for both: the Zeche Zollverein.

ADB: I’m here as a fellow in a summer academy called Prometheus 2010 (http://www.prometheus2010.de/). The academy studies “Promethean culture”—basically, interpretations of the classical myth about Prometheus and the stealing of the fire. The academy’s central research question is: Where do our energies come from? I’m in a seminar with philosophers Erich Hörl and Bernard Stiegler, in which we are looking at the relations between work and energy in our societies today.

24700: What other seminars did you take at the academy?

ADB: I took the seminar “Arbeitsenergien” (“Working energies”) during the first week and sat in on a seminar titled “Elektrische Städte” (“Electric Cities”) during the second. One of the faculty hosting the second seminar, Rolf Lindner, apparently used to work with Dick Hebdige, former dean of Critical Studies. There was also a seminar on energetic singing, run by Rupert Huber.

24700: Did you present any papers or workshops?

ADB: I gave a short lecture about the notion of care, especially the care of the self, in which I discussed Sophie Calle’s work Take Care of Yourself. This was in preparation of the course Take Care of Yourself (On Biotechnics) that I’m teaching this semester at CalArts.

ADB: Essen is in an industrial area of Germany called the Ruhrgebiet. In 2010, the whole area is the cultural capital of Europe. The site where the academy is being held is extraordinary: it’s called Zeche Zollverein–an old coalmine, dating from the 19th century, that’s now part of the Unesco World Cultural Heritage List.

Although it no longer functions as a coal mine, workers still go down into the mine every day to pump up the water that is rising in its shaft. Unfortunately, because of the mining, the whole area has sunk below sea level and pumping must be done daily to prevent flooding.

Today, the mine houses, amongst other things, the new Ruhr Museum, which was designed by the Dutch architect Rem Koolhaas, and also PACT Zollverein, a center for dance and performance.

24700: CalArts sent two students to Essen last year for the Feldstärke program, but we hear you’re working on another CalArts initiative.

ADB: Yes, I’m also here for another reason: to meet with Stefan Hilterhaus from PACT. CalArts is planning to collaborate with PACT on a student group exhibition in Essen in September 2011 as part of CalArts in Europe.

24700: We know that the program is still in its planning stages, but what is envisioned for ‘CalArts in Europe?’

ADB: It’s our hope that around this time next year, a number of CalArts BFA, MFA, and possibly also MA students will travel to PACT to showcase their work. Although PACT is mainly a dance and performance center, Stefan [Hilterhaus] would like the work that is shown at PACT to be representative of CalArts as a whole, i.e. of all of its schools.

We’ve also had two students in Essen this summer to prepare for the project. I’ve only been here for a brief while, but I am very impressed by the location and its particular history. For this reason alone, I’d highly recommend students to submit their work to this project.