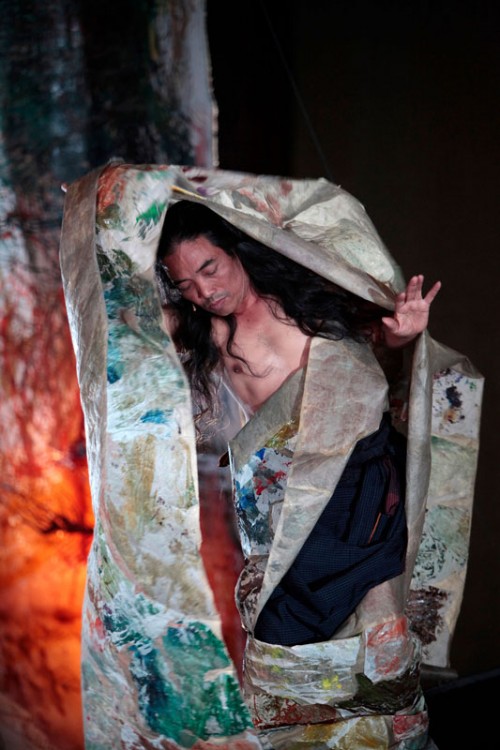 A combination of vivid movement, live music and sensuous visual design, the new piece is built around a “rain forest” stage set created from five 30-foot-tall hanging scroll paintings by Sardono—with their undulating drips and flows of oil paint shimmering in Tipton’s play of lights and shadows.

Enacted by Sardono and two other members of his company, Sardono Dance Theater, Rain Coloring Forest was developed during a residency at REDCAT this summer in collaboration with a pair of CalArts faculty members: composer David Rosenboom, whose live score plays off the vocalization techniques of the dancers, and film artist Maureen Selwood, who is projecting animations.

The Java-born Sardono is, according to The New York Times, Indonesia’s “most famous but also most rebellious choreographer and dancer.” Known for raising provocative social, political and environmental questions, his exceptionally fluid, holistic work is informed by both traditional and contemporary dance and music practices, including butoh, the court dances of Java and Bali, Kathak, even the pencak silat martial art.

Tipton, for her part, is one of the most influential lighting designers in the United States, having collaborated with the likes of Robert Wilson, Peter Sellars, The Wooster Group and Mikhail Baryshnikov. Her accolades include two Tonys, two Bessies, and the coveted MacArthur Fellowship, among others.

Sardono and Tipton first met in Indonesia in 2008. By the time of their second meeting later in the same year, Sardono had embarked on his painting project, using as his inspiration the Tibetan “Tanka” form of sacred scrolls. In making these works, he relied on his skill and intuition as a dancer, allowing his movements and sensations to guide the flow of oil paint organically across the canvas.

“I like to throw my body around a space, so for a dancer, painting is almost antisocial,” Sardono said to the Los Angeles Times recently. “But when Jennifer saw them, she said, ‘I see so many lights in your paintings. Let’s find a way to show them.’”

Later, during the Times writer’s visit to REDCAT, two of Sardono’s paintings were hung from the black box’s overhead grid. “It’s almost like they were created for this place,” he marveled.

Jennifer Tipton, meanwhile, has been busy with two other shows on Grand Avenue in addition to Rain Coloring Forest. She designed the lighting for director Gordon Edelstein’s re-imagining of The Glass Menagerie, which continues at the Mark Taper Forum through October, and for the upcoming Il Postino, which opens next week at L.A. Opera.