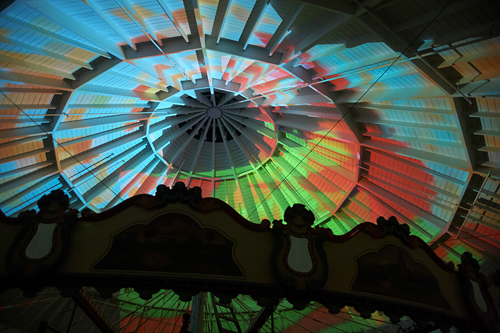 This year’s Glow festival, an all-night cultural experience and festival, is set to kick-off this Saturday from 7 pm-3 am in Santa Monica, where the beach, pier and Palisades Park will be re-imagined as a “playground for thoughtful and participatory temporary artworks.”

If you plan to attend, you’ll have a hard time not bumping into CalArtians involved with this year’s event–especially if you make it to the pier’s carousel. Machine Project, directed by Mark Allen (Art MFA 99), is featuring musical works presented on the carousel starting at 8 pm. Curated by Machine Project’s Chris Kallmyer (Music MFA 09), the Carousel Concerts comprises one-hour sets performed by six different groups. The works, written by mostly CalArtian composers, will feature the carousel in various ways.

“Some of the pieces where the performers are on the carousel as it’s moving will be shorter because the musicians become dizzy after a while,” says composer Chris Porter (Music MFA 09), who will have a composition in the program. Porter’s work, titled Brass Ring, makes reference to the small brass rings that a carousel rider would try to grab during rotations. The seven-part piece featuring brass players and percussionists concentrates on using the carousel in different ways to process the musician’s sounds.

Check out the complete list of pieces on the Carousel Concerts, as well as Nautical Music Encampment, which is another Machine Project work that features more at Glow.