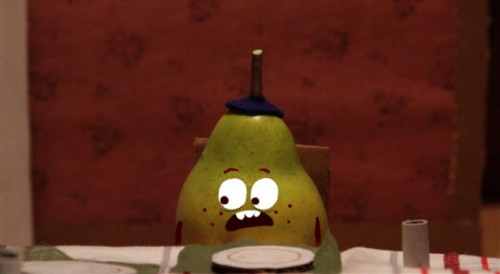 Shion Takeuchi's 'When the Time is Ripe' will screen at Frame by Frame on Saturday.

Storytelling through animation is the focus of the upcoming Frame by Frame showcase in Los Angeles on Saturday.  Seven short films from CalArts’ 2010 class of experimental animators, character animators and graphic designers will be screened. Following the program, each of the artists will have the opportunity to discuss their approach to narrative and cultural context in their work.

Daryn Wakasa (Art MFA 10), Frame by Frame’s creative director & co-producer, hopes that the showcase will examine the differences and similarities in graphic design, and experimental and character animation—fields which use narrative, imagery, motion and sound to reach audiences and tell their stories.

In the Frame by Frame mission statement, he writes:

An animator has a unique role when creating these moving metaphors because they have the ability to control and manipulate every frame within their film. They play the role of the director, the actor, the cinematographer and the camera operator. A graphic designer’s job is to find ways to visually communicate a complex idea through a clear and concise visual form but utilize composition, typography, language and imagery. Essentially what a director or animator does temporally, a graphic designer does simultaneously. A moving metaphor vs. a static metaphor. However, the emergence of motion design and technology has allowed the graphic designer’s role to merge with the role of the director and animator.

The films being screened on Saturday are: