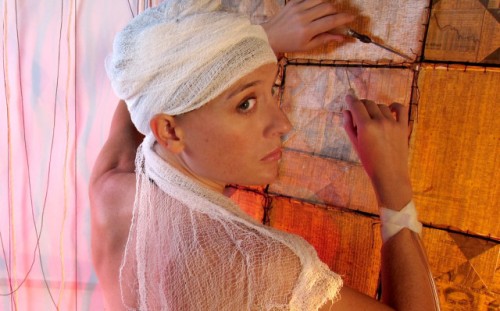 The new play Meditations: Eva Hesse, written by Marcie Begleiter and directed by David Watkins, provides a glimpse into the German-born artist’s last days as she struggles to complete one final piece. The young artist is battling a brain tumor, and scenes from her abbreviated life play out on stage in a series of poignant episodes.

As children in Germany, Hesse and her sister escaped the Nazi regime on one of the last kindertransport (a Jewish children’s rescue operation) trains before the outbreak of World War II. And although the girls were reunited with their parents in London, Hesse would eventually endure the pain of her parents’ divorce, her mother’s suicide, her own failed marriage and the cancer that would eventually end her life at age 34.

The artist is renowned for her work in sculpture, particularly with plastics, fiberglass and latex. Ironically, it was in Germany that the turning point in her artistic life began. From the Meditations website:

After studying at Yale she and her husband, artist Tom Doyle, were invited to live and work in Germany for a year in an abandoned textile mill, surrounded by remnants of the German industrial machine. In that environment, filled with shadows of her old life, she began making some of the 20th century’s most beautiful and influential sculptures.