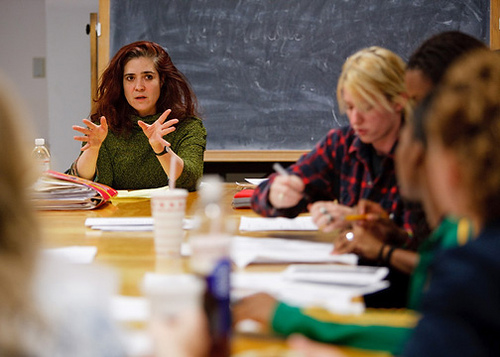 Christine Wertheim, at left, leads her 'Womanhouse' class at CalArts.

In the past few years Christine Wertheim, chair of the MFA Writing Program in the School of Critical Studies, has organized four one or two-day conferences or symposia on a range of writing-related subjects held at the Museum of Contemporary Art, Los Angeles (MOCA).

Previous conferences included: Feminaissance: a 2 day Meditation on Women, Writing, and Experimentation in 2008; a 2009 panel on Image and Text; and the day-long conference on Women, Art and Activism for International’s Women’s Day this past March.

On Saturday (Oct. 2) Wertheim–on behalf of the MFA Writing Program and the MA in Aesthetics and Politics Program at CalArts–will again host two panels and serve as moderator of one, in the day-long discussion: Writing the Future: A Symposium on The Future of Writing. The conversation will focus on the political, ethical, communal, institutional and aesthetic futures of writing and their likely affects on writers.

Writing the Future: A Symposium on The Future of Writing
Saturday, Oct. 2 at 1 pm
The Museum of Contemporary Art (MOCA), Los Angeles
Admission is free

Writing the Future: Schedule and agenda