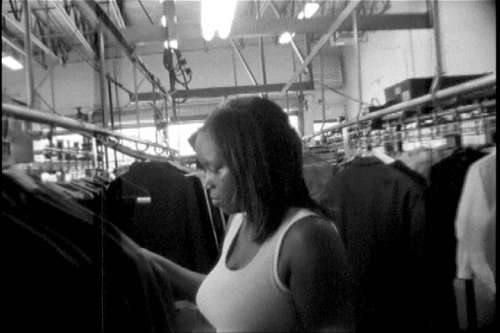 During the past 12 years, Kevin Jerome Everson, a filmmaker and associate professor of Art at the University of Virginia, has completed three feature films and nearly 50 short 16mm, 35mm and digital films that focus on the working class culture of Black Americans and others of African descent.

Everson’s works often take viewers back to his hometown of Mansfield, Ohio, and nearby locales. The area is explored yet again in his latest film Erie, which had its West Coast premiere at REDCAT last night.

Erie consists of 10 single-take, 16mm black-and-white shots filmed in and around Lake Erie communities, including Mansfield, Cleveland, Buffalo and Niagra Falls. The sequences are thematically linked through the exploration of the African American migration from the South to the North, as well as the revelatory realities of every day life.

Tonight, the Structuring Strategies class and film series at CalArts looks at other films from Everson’s vast oeuvre in a program titled, To Do Better.

A good portion of the shorts aim for the caustic rather than the poetically soothing. In found-footage piece Playing Dead a bloodied young man describes to a television reporter how he had to lay absolutely immobile to survive an unprovoked attack by a group of armed men. As soon as one even begins to imagine this nightmare the film ends, blowing through the conscious like a tornado. Meanwhile, the almost tangibly grainy Undefeated and Ninety-Three revel in the small ecstasies of existence: a man shadowboxing by the side of the road as his friend fixes their car, and a nonagenarian blowing out the candles on his birthday cake in super-slo-mo. Longer works include Company Line, a half-hour documentary about the migratory history and current disenfranchisement of Mansfield’s black citizens, and Old Cat, a single 10-minute shot of two men paddling silently around a lake, the two films individually representing the twining documentary and formalist strands of Erie.

A list of films that will be screened during tonight’s program follows: