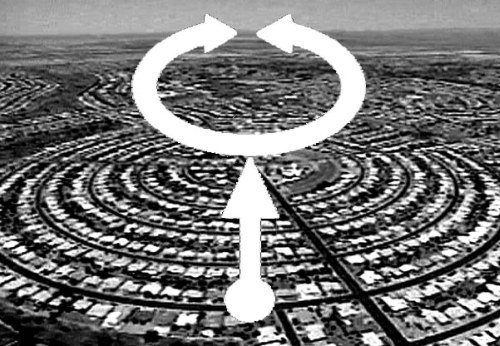 From 'Wasteland Utopias' by David Sherman.

The Arizona-based artist is one half of the artist collaboration known as Total Mobile Home (filmmaker and artist Rebecca Barten being the other half.). The duo has been recognized for founding the world’s first “microcinema” in the basement of their San Francisco apartment in 1993. The 30-seat experimental film/video theater produced more than 120 shows, transforming the spatial relationship between film, filmmaker and audience.

His filmmaking appropriates found footage and incorporates collage to construct “hidden histories through the radical play of form and material.”

Tuning the Sleeping Machine (16mm, 13 minutes, 1996) was included in the 1997 Whitney Biennial. Using found footage, the film “maintains a dreamy oscillation between visual abstraction and a disjointedly submerged narrative of sexual menace,” noted Film Comment writer Paul Arthur. “… [It] recalls our shared experience of late-night television in which lambent images emerge from the screen and turn strange as they percolate through our half-conscious thoughts and reveries.”