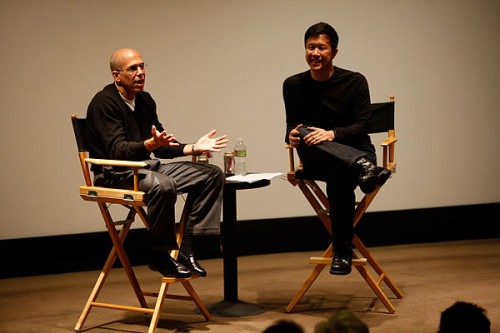 Jeffrey Katzenberg of DreamWorks Animation with faculty Ted Ty at the Bijou.

Last Tuesday afternoon, students, faculty and staff of the School of Film/Video at CalArts crammed into the Bijou Theater for a visiting artist lecture and Q&A session with Jeffrey Katzenberg, CEO of DreamWorks Animation.

After an introduction by CalArts President Steven D. Lavine, Katzenberg–a trustee emeritus of CalArts–shared a 5-minute clip from the studio’s upcoming feature Megamind. (We’ve included a clip from Comic-Con below.) Directed by CalArts alumnus Tom McGrath (Film/Video BFA 90), the film stars Will Ferrell, Jonah Hill, Tina Fey and Brad Pitt. The preview delighted the audience of (mostly) student animators. Katzenberg noted that the film is the studio’s third feature this year alone–following How to Train Your Dragon and Shrek Forever After–and the “most adult in terms of general audience appeal.”

For the next hour, Katzenberg answered questions from CalArts faculty member and DreamWorks animator Ted Ty about his time at Paramount, Disney, DreamWorks and his secrets to success.

Here’s some of what was said at the event: