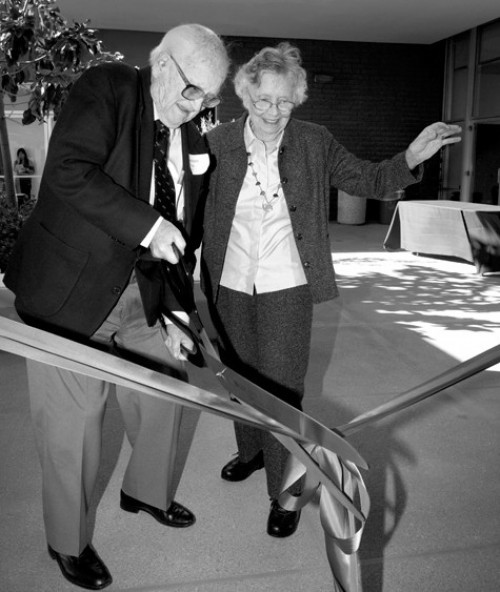 Editor’s Note: Yesterday, the CalArts community held a memorial celebration in honor of Harrison “Buzz” Price, a trustee emeritus of CalArts, who passed away on Aug. 15. Members of the Price family and other special guests joined faculty, staff and students for the hour-long remembrance, highlighted by a program of video clips, remarks by son Bret Price and friend Marty Sklar, and vocal performances by students from The Herb Alpert School of Music at CalArts.

In the following 24700 blog post, CalArts President Steven D. Lavine remembers the man who was instrumental to the founding of the Institute.

There’s a conference room at CalArts that faculty, staff and students affectionately call “The Buzz.” It’s used nearly every day during the school year as a classroom or meeting space, but many people might not know the story behind the name.

The room is dedicated to–and named after–Harrison “Buzz” Price, one of CalArts biggest supporters. When I received word that Buzz passed away in August after a long illness, and even after letting the news sink in for a few months, it’s almost incomprehensible for me to think of CalArts without him.

It’s not an exaggeration for me to say that there might not be a CalArts had it not been for Buzz Price.

Buzz was a brilliant economist and a friend and advisor to Walt Disney. It was Buzz who analyzed, researched and recommended that Disney build his first theme park in the middle of an orange grove in Anaheim, California, in 1953. In some ways, many theme parks around the country today have followed a planning model similar to Buzz’s.

A few years later, Disney asked Buzz to write the original feasibility study for a performing and visual school for the arts. It was Disney’s dream, but unfortunately, Walt Disney died before he saw his dream realized. It was Walt’s brother Roy O. Disney and Buzz Price who shepherded CalArts from concept to concrete.

Walt’s daughter Diane Disney Miller remembered Buzz as integral to the CalArts project: “Before he entered the hospital,” Diane reminisced, “Dad had placed a stack of notebooks in Buzz’s hands, saying, ‘Here, take care of my school for me!’ Dad knew the hands to place his dream in, that Buzz would see it through … and he did.”

For more than 40 years, Buzz continued to support CalArts. He sited the campus in the Santa Clarita Valley and continued his involvement right up through the building of REDCAT in the Walt Disney Concert Hall complex. Building there, Buzz told me, would be a “sort of homecoming since Mrs. [Dorothy] Chandler had wanted CalArts to be built at the Music Center at the outset.”

I could talk forever about Buzz’s business acumen and accomplishments, but Buzz the man was far more interesting. He was a person with a great zest for life, full of curiosity and humanity, and a person of great loyalty. His soft-spoken nature and witty intellect were enviable. And he and his wife Annie were inspiring to watch as a couple.

When it was no longer safe for him to drive, Annie drove him to CalArts board meetings. Their enduring relationship has been a model for myself and my wife, as individuals, as a couple and as much loved friends. Not only will CalArts be a sadder place, but the world will be a poorer place without Buzz.

So, the next time you’re on campus, and you happen to take a walk by “The Buzz,” remember the name and think about the man who helped build the school that he, and I–and countless others–have loved.

Rest in peace my friend,