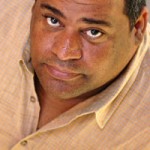 Poet-author Chris Abani visits CalArts tonight for a lecture on Art as Witness, the first installment of CalArts’ new Art, Justice & Global Aesthetics: The Equity and Diversity Lecture Series. The Nigerian-born Abani, a professor of English at the University of California, Riverside, has won acclaim and awards for his poetry and prose, including a 2009 Guggenheim fellowship for fiction.

Abani published his first novel, Masters of the Board, at age 16, but he was imprisoned two years later for six months because the plot of the political thriller was too similar to an organized coup attempt in Nigeria. Abani continued writing, was arrested again and sent to the Kiri Kiri maximum security prison for performing political plays with a guerrilla theater troupe in front of government offices. Eventually Abani served a third prison term–this time on death row–for writing an anti-corruption play, Song of a Broken Flute. He was released only after a series of bribes to jail officials.

His writing can be powerful and devastating. Here’s a three-line excerpt from Abani’s poem “Say Something about Child’s Play” from Hands Washing Water:

This boy says: Take my right eye,
it has seen too much, but leave me the left,
I will need it to see God.

“We wanted to get students, faculty and staff to begin thinking more deeply about the intersections of art and diversity as well as equity in the arts. I could think of no better person to inaugurate this series than Chris Abani,” says Assistant Provost for Equity and Diversity Matthew Shenoda, who curated the series with CalArts’ Diversity Committee.

“His work, spirit, and intellectual and creative production are exemplary models for equity and diversity. His writing acts as a praxis for understanding the human condition. He consistently challenges the way we understand ourselves and the cultural contexts we come from. His work pushes boundaries thematically and aesthetically and calls into question how we view ourselves as artists and citizens.”

Here’s a TED talk that Abani gave on the stories of Africa in 2007: