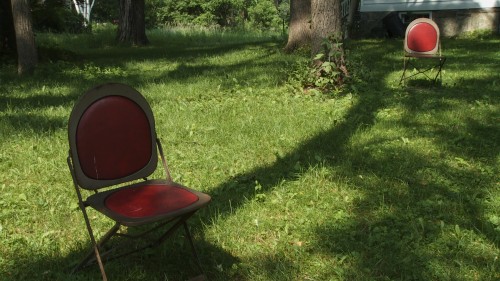 Still from 'Les Chaises,' a video by Vincent Grenier

Experimental filmmaker and video artist Vincent Grenier will screen and discuss several of his films during tonight’s Structuring Strategies class and lecture series at CalArts’ Bijou Theater. His presentation will focus on the question: “Framed Filmed Narratives: What does framing mean and the importance of meta.”

The Quebec City-born filmmaker’s prolific career spans four decades, and his films have left their marks on avant garde film scenes in Montreal, New York and San Francisco. His oeuvre was recently the subject of retrospectives at Media City Film Festival in Windsor, Ontario, and Images Film & Video Festival’s Canadian Images Spotlight in Toronto. Earlier this year, Grenier received one of the 180 2010 Guggenheim Foundation Fellowships that are awarded to artists, scientists and scholars on the basis of achievement and exceptional promise.

An excerpt from his own artist statement:

My work is fascinated by contingencies: digressive moments, unbalanced spaces, assymetrical compositions, revealing details, incongruous recordings, and unexpected linkages between form and meaning.   My compositions operate as a series of short circuitings Mand rewirings of expectations of unified cinematic space and time. Instead, they create visual movements comprised of both experiential and physical interactions with the image and philosophical queries into the nature of representation.

My work plays off the contradictions between my artistic intentions and the physical results of shooting: these divergences generate useful accidents that reveal much more complex ideas about the forms and structures of daily life.   The spectator’s assumptions and ideologies are made to collide with the cinematographer’s mechanics and aesthetics. These conflicting agendas have formed the foundation of my artistic work for over thirty years.   They draw attention to how larger cultural and social constructs commingle in a myriad of permutations condensed into the visual….

Films on the Structuring Strategies program: