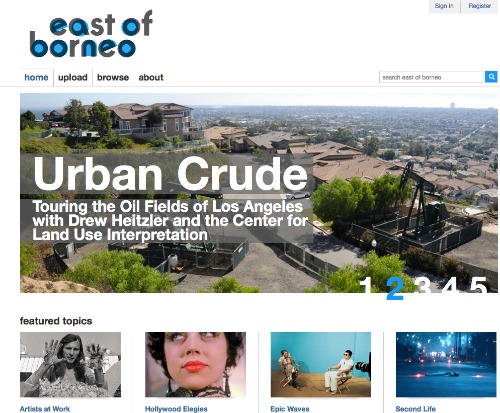 East of Borneo, a new online art journal and multimedia archive from CalArts School of Art, launched last week. Edited by School of Art Dean Thomas Lawson, the journal looks to breathe new life into the traditional art magazine format while also giving form to the sprawling history of art in Los Angeles.

What we imagined was an intricately interwoven site that would allow us to build an archive of Los Angeles, past and present, using the power of a networked collectivity to create depth and complexity. To some Web 2.0 is old news, but established magazines are only slowly awakening to its challenges and possibilities. East of Borneo’s genesis has been long and deliberative: several years of thinking past the delights and constraints of the printed page, and one very intense year of thinking through the actual possibilities of current online publication.

East of Borneo presents and examines contemporary art and its modern history, as seen from Los Angeles. Recent articles include: Mythology and the Remake: The Culture of Re-performance and Strategies of Simulation by Jenni Sorkin, a Post-Doctoral Pacific Standard Time Fellow at the Getty Research Institute; an excerpt of Thom Andersen’s film Los Angeles Plays Itself (2003); Kalifornienträumen: Bertolt Brecht’s Los Angeles Poems and Other Sunstruck Germanic Specters by Swiss-based poet and critic Quinn Latimer; and a transcript of a conversation between artists Ingrid Calame and James Welling.

East of Borneo hasn’t completely severed ties with print. Although the project is primarily web-based, East of Borneo will also house an imprint of highly focused books that “reconsider neglected material and provocative themes within a contemporary context.” The first book to be published in early 2011 focuses on selected writings of architecture critic Esther McCoy, edited by and with an introduction by writer Susan Morgan.