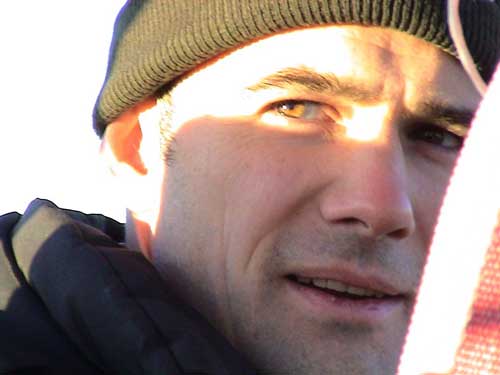 Update: REDCAT has added a second show on Halloween with Mark Danielewski at 9 pm!

If you’re in the mood for a good ghost story–with a twist–then think about spending All Hallows’ Eve at REDCAT on Sunday.

The story focuses on a sword that wounds–but those wounds only manifest themselves when a person enters his or her 50th year.

The chills begin on a late October evening at an East Texas ranch when Chintana, a seamstress recovering from a painful divorce, encounters a shadowy caped Story Teller recounting for five orphans a tale of revenge, a harrowing quest, and a terrible sword, which everyone soon realizes waits before them, concealed in a long black box, honed for new crime.

Only 1,000 first edition English books of the illustrated novella were released in 2005, with an additional 1,000 printed the following year. As in his other works, Danielewski played with traditional book formatting and type–The Fifty Year Sword uses five colors on quotation marks to denote which of the five characters are speaking.

At REDCAT, Danielewski will be joined by four special guest performers who’ll give voice to the characters, and feature the work of sound designer John Zalewski and theater artist Christine Marie, who designed shadow effects for the production.

In the video below, Danielewski discusses his life, writing and art: