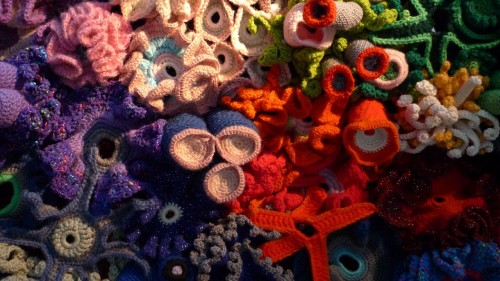 Closeup of crochet corals by Dagnija Grienzne from the Latvian Reef. © Institute For Figuring 2010

Christine Wertheim, who heads CalArts’ MFA Writing Program in the School of Critical Studies, and her sister Margaret Wertheim, a science writer, lecturer and exhibition curator, are also co-founders of The Institute for Figuring.

This past summer the Wertheims were in Dublin, Ireland, exhibiting one of their Institute projects, a crocheted coral reef, at The Science Gallery. What began five years ago in their living room, as experiments in modeling hyperbolic mathematical space, has grown into something of an international phenomenon. The reef has traveled to many cities and prior to each showing, the local population is invited to create what the Wertheims call “A People’s Reef.” The project brings attention to the deleterious effects of global warming on coral reefs, as well to the variations that participants, (99 percent of whom are women) bring to the work.

“Differing materials, stitch sizes, irregularities in the space between stitches or the tightness of the stitches will all result in radically different looking models, much like a reef,” says Christine. “Ireland was the first place in which the reef had been exhibited in a science gallery, and so was a new experience for us. The best innovation was the gallery’s ‘interpreters’—local science students who added their expertise and knowledge to what we gave them, and guided the viewers through the show, explaining the maths, biology, ecology—or whatever was their specialty. They all learned to crochet hyperbolics and were brilliant at both engaging the audience and at really explaining the scientific ideas embedded in the show, especially the maths, which everyone wanted to know about.”

Earlier this month, the Hyperbolic Crochet Coral Reef opened at the newly built Sant Ocean Hall  Smithsonian Museum of Natural History in Washington, D.C., and will be on display through April 24, 2011. The Bleached Reef, a smaller and more delicate component of the reef is currently also on exhibition at Cooper-Hewitt, National Design Museum (New York City) as part of the National Design Triennial: Why Design Now? through Jan. 9, 2011.

Here’s a video of Margaret Wertheim presenting a more complete description and explanation of the coral reef project at a TED conference in Long Beach last year.