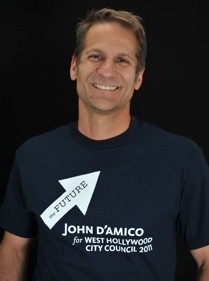 John D’Amico, a 2009 graduate of CalArts’ School of Critical Studies Aesthetics and Politics program, is putting his art school degree into action: He’s making a bid for a seat on the West Hollywood City Council during the March 2011 elections. (Also, he’s keeping things in the CalArts family, and hired alumna Renee Nahum as his campaign manager.)

We thought we’d strike while the topic was still hot from the recent mid-term elections and ask him a few questions about his time at CalArts and his interest in politics.

JD: I started at CalArts in 1981. I was in the Theater School pursuing a BFA and one of my very first memories of CalArts includes being in a Critical Studies lecture class with Sande Cohen. It was his first day teaching and my first day as a student that year and he started right in on the tendency toward institutional bias and the importance of critique. I was hooked.  I left CalArts in December of 1983 after 5 semesters, finished my bachelor’s degree and also finished a master’s in architecture at different schools (though my love for CalArts always burned bright). In 2008, I returned to CalArts as part of the inaugural class of the Aesthetics and Politics Program. And Sande Cohen was still teaching and taught my last class in 2009—and his last class too.

And what I knew would be true about CalArts when I returned after 25 years was that the same optimism and fearlessness would be there as a frame for my own studies and ideas.

For the past 10 years, I have been working at UCLA as the Principal Project Manager of the construction of the UCLA Santa Monica Medical Center and Orthopaedic Hospital as part of the UCLA Capital Programs Department.  Before that, I worked at Disney Studios on the ABC World Headquarters Building and on Liz Larner’s (Art BFA 85) bridge/sculpture across Riverside Drive.

In the ’90s I also worked at the LA Housing Partnership project, managing over 250 affordable housing units in historic buildings along the Wilshire corridor, and at AIDS Project Los Angeles as the Co-Director of Public Policy, lobbying for dollars for services and housing for people with AIDS.

24700: Why did you choose CalArts as a school rather than a more traditional school for policy/planning/politics?

JD: Honestly, I never considered any other school, I wasn’t even looking to return to school. I had come across an announcement about the Aesthetics & Politics program, found the program description on the CalArts website and thought immediately: ‘This is what’s next for me. ‘

As a mid-career professional, I realized that I what I needed next to bring new adventure to my professional life was access to people and ideas that would challenge me to grow in new ways, ways I couldn’t necessarily have anticipated when I applied nor understand for perhaps years after I have finished. And that is exactly what happened—is happening. The CalArts faculty and my fellow students offered up a daily serving of new ideas, new ways of seeing, expanded my ideas about practice and the lesson that is strongest for me in my practice is my appreciation for balance at the edge of leadership.

JD: I worked with Norman Klein who pressed me to actualize my theory, to bring actions to my political ideas. My thesis was a series of fictional letters from 20th century thinkers and philosophers to their friends all written in room 59 at the Chateau Marmont.  I produced a performance of the letters at the Chateau and that performance brought to life the main theme of my thesis—that new ideas are often controversial, when carried forward, ultimately become accepted.

The complementary efforts of Norman and Program Director Martin Plot opened me up to taking action in my local community.

24700: How did you make the transition from CalArts to urban planning?

JD: Actually, it was a transition from urban planning to art school. I jumped right in. I kept my UCLA Project Management job while I was in school, and I would strip off my suit coat and tie while driving up the 405. I would catch the work in the galleries, or the noon concert and settle into lectures and my class work. It was an invigorating year. I would recommend it to everyone who can manage to squeeze it in. I think CalArts is exactly the kind of place that could support an entire cohort of students like me, mid-career professionals who are looking for access to the very thing that CalArts provides. I did meet some other older students and we all had the same experience of rejuvenation and refinement of ourselves and our ideas. And we’re all well into the second half of our careers.

24700: What draws you to politics and seeking political office?

JD: I am drawn to the notion that the individual, in a coalition frame, can make a difference. That leadership and the democratic process of electoral politics is such a precious gift that this country continues to give itself and I am interested in being an active participant in that process. Running for office, especially in a world-famous small town like West Hollywood is a true adventure. I love West Hollywood; it’s been a place that believes in the importance of the individual and the FUTURE of all of us as equal participants in life. Yet, recently West Hollywood has begun to drift sideways, has lost its edge as a place of opportunity and creativity and I am committed to reintroducing the city to its core values.

24700: If you could fix one issue in American government–on the local, state or national level–what would that be?

JD: People need to vote. Americans are very busy people, and it is easy to not vote. In my own city, there are more than 25,000 registered voters and fewer than 5,000 vote in the West Hollywood municipal elections—less than 20%.  I am committed to increasing voter participation and welcome the support of everyone interested in working on a get out the vote (GOTV) effort.

Editor’s note: CalArts does not endorse any political candidate or political organization, and the views expressed in 24700 do not constitute an endorsement by the Institute.