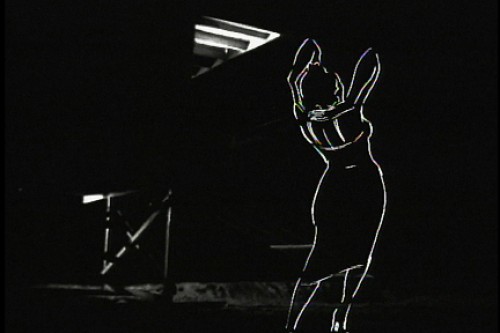 In Mistaken Identity, Selwood re-imagines the character of Velda from Robert Aldrich’s film noir classic Kiss Me Deadly (1955) to create a “personal meditation on romantic myth and self-deception.” During a recent phone interview, the filmmaker said that she was drawn to Velda, a strong character, and also the way the film portrayed the archetypical working woman after World War II.

“[Kiss Me Deadly] just resonated with me when I saw it in the ’70s, and it made me think about how we model ourselves after some ideal,” said Selwood. “More specifically, how the ideal woman is reduced to a stereotype.”

Selwood made the film after moving to Los Angeles and examined the city through the lens of Mickey’s Spillane’s world. She filmed broken steps, under ocean piers and expressways and then drew over the frames, combining live action and animation. At the Friday screening, there will be a new twist to the film, when it will be accompanied by a live performance by singer Clarissa Romano.

The exhibition of drawings will serve as a complementary backdrop for the evening, with the works raising questions about search for identity and the ways people are defined by their childhoods. A sampling from the exhibit follows:

With Your Face Close to Mind: Drawings by Maureen Selwood closes on Nov. 20.