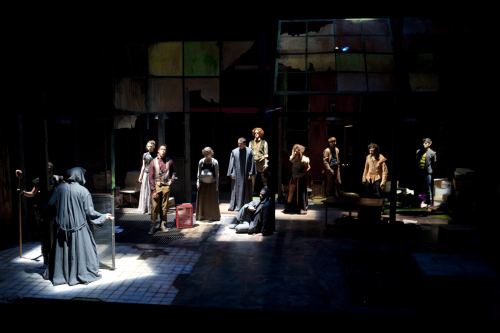 A scene from Measure for Measure at CalArts. | Photo: Scott Groller

Taking a break from his career in experimental theater, Cucuzza, a highly regarded theater artist, filmmaker, actor and acting teacher, enrolled in the School of Theater’s Directing Program in 2008. His track record includes six years as an artist-in-residence with Richard Foreman’s Ontological-Hysteric Theater in New York, where he mounted many highly acclaimed original plays.

“I came to CalArts to work with classic texts,” he said during a recent interview. “My ideas were getting bigger and bigger, I needed a context and the resources to realize them—my work has grown immeasurably since I’ve been here.”

While at CalArts, Cucuzza wrote and directed the musical extravaganza Hellzapoppin,’ inspired by the 1941 film of the same name. Premiering in fall 2009, it was a compendium of the dark physical comedy he had originated up to that point; Measure for Measure marks a transition in his evolution as a director.

Having never dealt with Shakespeare, Cucuzza was asked to direct a scene from Othello in a class at CalArts. “I don’t consider myself a playwright, but rather a director who works with his own material,” he said. “I am always hoping to find writing that is dramaturgically sound, has tremendous depth and is open to interpretation. I found all this in Shakespeare.”

Directing Measure for Measure, Cucuzza allowed a faithful reading of Shakespeare’s words to inspire his vision of the play. His practice is informed by his experience with Elevator Repair Service, with whom he has performed in nearly 30 major festivals and theaters in the U.S., and across the globe. Most recently, he created and played the role of Tom Buchanan in the company’s critically acclaimed Gatz—a complete staging of the entire text of The Great Gatsby.  “I did the entire book 60 times and still found new elements. It is organic and lives.”

Measure for Measure is considered one of Shakespeare’s problem plays. “It has structural irregularities and a mix of comic and tragic scenes—but it is the problems that make it interesting and open to interpretation.” Bringing his own vision to the play, Cucuzza created “an abandoned underground world populated by those who have been abandoned…a fallen world filled with light and shadow.” The tone of his production is menacing and ominous. The music—Tom Waits’ songs and a score composed by The Herb Alpert School of Music at CalArts faculty member Mark Menzies—galvanizes the atmosphere of tension.

Cucuzza regards this dynamic staging as one among many possible variations. “I can look at the play from a distance. There is no concrete reality about a piece of writing. I can take it out of its original setting and visualize what it means to me. Measure for Measure is an infinite text. I could start from the beginning tomorrow and come up with a new production.  The process is never finished. It is infinite. “