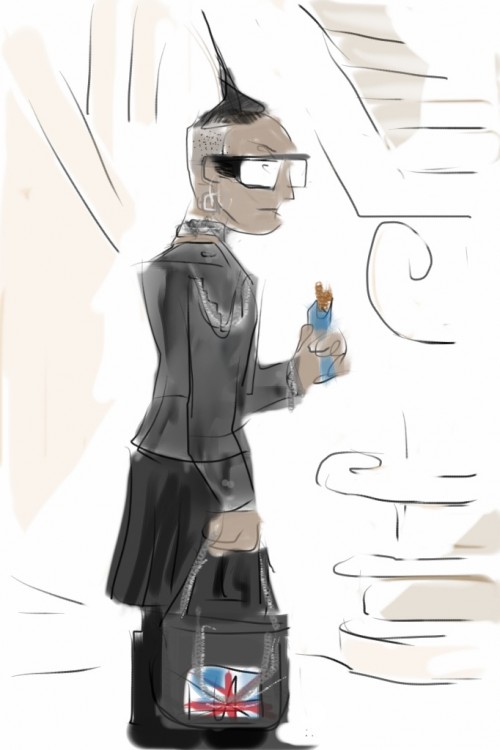 Eric Molinsky, 39, graduated from CalArts’ Character Animation program in 1999 and joined Nickelodeon’s animated Rugrats series as a storyboard artist. But he soon came to realize that his heart wasn’t in animation.

“I didn’t want to be drawing all day in a cubicle,” Molinsky said in a recent phone interview. I wanted my voice to be heard.” So Molinsky moved from LA to New York and began interning with Studio 360, a co-production of Public Radio International and WNYC New York Public Radio. He finally found his voice—as a freelance radio producer and reporter.

Lately, however, Molinsky’s been garnering more attention for his artwork. A recent New York Times article profiled his hobby of drawing people he sees on the city’s subways:

He is an artist who secretly draws fellow subway riders on his iPhone, and has collected scores of New York characters on his blog. “Usually if my cover is blown,” Mr. Molinsky explained, “it’s kind of a slippery slope to the drawing just not really happening in the end.” Using his index finger and the application Sketchbook, he quickly drew a crude black-and-white outline of the woman’s face and then began to add layers of color. A base of skin tone, yellow for her dyed hair, green spectacles….

“When I was at CalArts, my favorite part of the animation portfolio was the sketchbook drawings, which show that you can capture scenes quickly,” he said. “I used to go hunting for good spaces to draw. There was this [now closed] cafe in Sherman Oaks that always had the weirdest people. Then I moved to the Beverly/Fairfax area, where there were more actors, but they were more boring to sketch.”

Molinsky still remembers CalArts animation faculty member Corny Cole telling him that his drawings used too many formulas, so Cole made him draw with a pencil attached to a stick in his left hand (Molinsky is right-handed) in order to draw more “honestly and sincerely.” He now illustrates his subway sketches using another crude instrument—his index finger on the iPhone.

“Everything I do, I’m using the skills I learned at CalArts,” he said. “I may still use formulas in my drawings, but I use them a lot less.”

Recent subway sketches from Molinsky’s blog have been posted above.