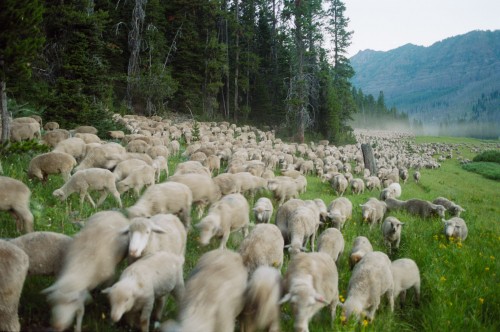 The doc 'Sweetgrass' focuses on sheep ranching and herding.

The Structuring Strategies class and viewing series welcome documentary filmmakers Ilisa Barbash and Lucien Castaing-Taylor to the Bijou Theater tonight for a screening of their film Sweetgrass (USA, 2009, 101 minutes, 35mm) at 7 pm.

The film is an “unsentimental elegy to the American West” and follows modern-day cowboys as they lead their flocks of sheep up into Montana’s Absaroka-Beartooth mountains for summer pasture. Nature is at once friend and foe in the film—as cowboys deal with harsh realities of mountain herding against a stunning landscape.

Although Sweetgrass took nearly eight years to complete, the majority of the material was shot in 2001 when Barbash and Castaing-Taylor documented the last rancher to take his sheep into the mountains on a federal grazing permit.

From the New York Times review:

The movie truly belongs to the sheep, which turn out to be fascinating, almost hypnotic subjects for the camera, whether they’re comically bleating at one another like rush-hour subway riders or swarming across the range like a single organism. The filmmakers make brilliant use of extreme long shots throughout, inserting breathtaking panoramas into the mix that convey the surrounding grandeur even as the images also suggest that however much man tries to dominate nature, nature prevails….

The couple has collaborated on a number of other films, including Made in USA (1990), which examines sweatshops and child labor in LA’s garment industry, and In and Out of Africa (1992), an “ethnographic video about authenticity, taste, and racial politics in the transnational African art market.”

Barbash currently serves as curator of Visual Anthropology at Harvard University’s Peabody Museum, and Castaing-Taylor is director of Harvard’s new Sensory Ethnography Lab, and a professor of Visual & Environmental Studies and of Anthropology.

Watch the film’s trailer below: