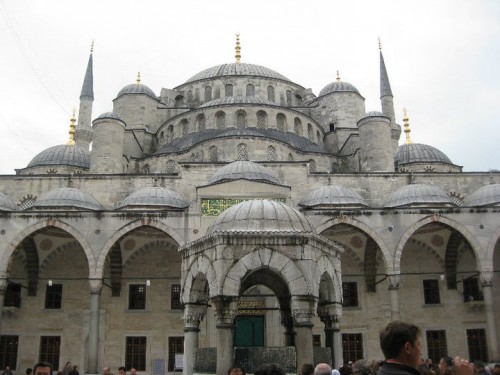 This past semester, MFA music composer Ellen Reid and recent Theater School graduate Toussaint Jeanlouis (MFA 10) traveled to Istanbul, Turkey, to participate in the final leg of the Feldstärke International program. Selected by CalArts as the Institute’s participants, Feldstärke offers 50 arts students from all arts disciplines the chance to collaborate with other artists in an international setting. Earlier 2010 Feldstärke residencies took place at  CENTQUATRE (Paris) and PACT Zollverein (in Essen, Germany), the two administrating institutions of the program. (CalArts also hosted the Feldstärke program in Oct. 2009.)

In October, Feldstärke participants traveled to ¨cˇu’m„a*, a nonprofit contemporary art organization in Istanbul, a city where Europe and Asia physically and figuratively meet. Reid’s and Jeanlouis’ final projects reflected the city’s complexities and cultural conflicts.

Reid says that Istanbul was, by far, the Feldstärke residency of most education value for her, largely because she and her group immersed themselves in Gypsy (Roma) culture—exploring the lives of a people often relegated to the fringes of Turkish society.

It was one of the group’s members, Fuat Mete, a Turkish student who was personally curious about the Gypsies living within Istanbul that sparked others’ interest in the project. He served as the group’s translator/guide as well as also participating artist.

“We explored a particular Gypsy neighborhood and tried to figure out how the people ‘fit’ within Turkish society. There was a constantly changing relationship between the Gypsies and the city.”

The group observed and met Gypsy musicians in studying the neighborhood, and eventually invited the musicians to play and dance with the group as a component of their final project, which, in part, recreated a Gypsy home.

The photo gallery above shows scenes around Istanbul and the ‘Lifestyle’ group project.

Toussaint Jeanlouis’ time in Istanbul proved to be more introspective. He walked the city’s streets—both alone and with his Feldstärke group—and was immediately drawn to the culture and people.

But he also felt somewhat isolated. “Where were all the black people?” he asked rhetorically during a post-trip interview. “I counted 13 black faces through the whole trip.” This observation led to Jeanlouis’ exploration of Turkish culture, identity and the idea of “home” for both himself and his host country—which is awaiting a decision on its application to the European Union.

“What will happen to Turkey’s people and culture if it becomes part of the EU?” “What would that do to the traditional arts?” Questions such as these guided Jeanlouis’ production of a short film, iN TURKEY i AM BEAUTiFUL, which we’ve posted below. Transportation also became a theme in his personal and group projects since students traveled via various modes—tram, plane, train, walking, bike, ferry, taxi, bus—to reach parts of the city and neighboring islands.

“There’s constipation of traffic in Istanbul,” he said. “So many decisions had to be made about how to travel around the city.”