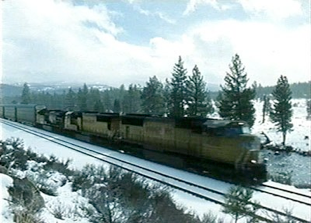 School of Film/Video faculty member James Benning’s film RR (2007)—which makes its Los Angeles debut on Sunday, Jan. 9— was lauded by the Film Society of Lincoln Center’s Film Comment Magazine as one of the best avant-garde films and video of its year and, more notably, the decade 2000-09. (Coincidentally, Benning’s film tied for eighth place on Film Comment’s list with The Fourth Watch [2000] by fellow CalArtian Janie Geiser, director of CalArts’ Cotsen Center for Puppetry and the Arts.)

The RR screening at the Egyptian Theater in Hollywood inaugurates the 36th year of LA Filmforum, the city’s longest-running organization dedicated to screening experimental film and alternative video art. Benning will be in attendance at the screening to discuss his work.

On its surface, RR, which is an abbreviation for railroad, is a documentary on trains in America. But like many of Benning’s works, the film becomes more a meditation and commentary on capturing time. The 16 mm camera never moves, with each shot taking as long as it takes for a given train to cross the frame.

Like Thom Andersen‘s major minimovie Get Out of the Car, RR uses a fixed 16mm camera and shot duration to crack open the image and pull out the entire experience of living in America, from joy (nostalgia for the days of boxcar jumpers) to fear (the sickly red algae that covers a river) to anger (a train chugging across Lake Pontchartrain that could be loaded with oil from the Deepwater Horizon) to hope (the dirty beauty of the final shot).