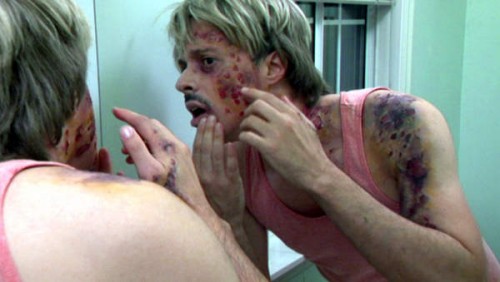 'My Barbarian' ends this week at the Hammer Museum. | Video image courtesy of the artist.

The first museum exhibition by the performance collective My Barbarian—comprising CalArts faculty member and alumnus Malik Gaines (Critical Studies MFA 99), Jade Gordon and Alexandro Segade—is in its final week at the Hammer Museum in Westwood, wrapping up next Sunday, Jan. 23.

The group’s “Hammer Projects” exhibition, titled The Night Epi$ode, is an installation of six videos that use science fiction tropes to link stories of the economic meltdown with the supernatural. Inspired in part by period episodic television programs such as Rod Serling’s Night Gallery, as well as incorporating French existentialism and absurdist dialogue, Gaines, Gordon and Segade appear in videos in which, among other things, an unemployed woman romances a supernatural being; a man turns to witch doctors following a health insurance hassle; and art curators trapped in an executive board room curate—literally—nightmares drawn from today’s economic anxieties.

The exhibition is accompanied by a “Death Panel Discussion,” held at the Hammer Wednesday night, Jan. 19, at 7 pm, in which the members of My Barbarian reflect on “hysterical public discourse and private insecurities amplified by the recession through hair-raising, brain-teasing song and dance routines.”

Founded in 2000, My Barbarian has performed at numerous venues, including the Roy and Edna Disney/CalArts Theater (REDCAT), The Museum of Contemporary Art, Los Angeles, the Whitney Museum of American Art, the Studio Museum in Harlem and the New Museum.