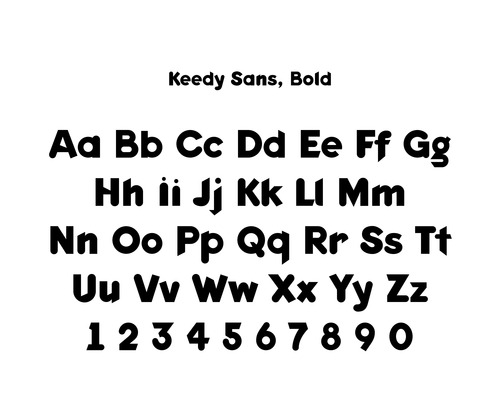 On Monday, the Museum of Modern Art announced the acquisition of 23 digital typefaces for its Architecture and Design Collection. Two of the fonts were created by CalArtians: Keedy Sans by Graphic Design faculty Jeffrey Keedy and Template Gothic by alumnus Barry Deck (Art MFA 89).

While there are more than 28,000 works in the museum’s 79-year-old Architecture and Design Collection, only one typeface was previously included: Helvetica.

Now everyday fonts like Verdana and Georgia, designed by CalArts visiting artist Matthew Carter, or OCR-A (used prominently in product bar codes) and others designed for the digital age like Dead History by former Graphic Design faculty P. Scott Makela, as well as Keedy’s and Deck’s, have each been recognized as significant cultural artifacts in the history of typography.

As computer programs for type design became more sophisticated in the 1990s, designers felt free to experiment in ways that had not been possible before—for instance, creating a typeface from a laundromat sign, as Barry Deck did when he designed Template Gothic (1990), or designing a new typeface, as Jeffery Keedy did in 1991 because the fonts available did not satisfy his needs as a graphic designer….

And why specific fonts were selected:

Lastly, several of the fonts we chose visually reflect very closely the time and place in which they were made. Interstate and Gotham are purely late-twentieth-century American faces, celebrating vernacular type by making it exquisitely contemporary. Walker, Meta, Blur, Keedy Sans, Mason, and Template Gothic are all faces that represent a specific era in the digital revolution—the early 1990s, when digital typography was coming into its own. They were chosen based upon their importance to cultural history as well as their experimental aesthetics.