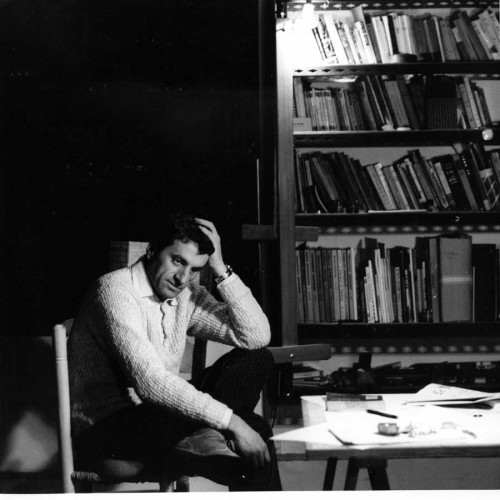 While Iannis Xenakis (1922-2001) is often regarded as one of the most influential avant-garde composers of the 20th century, helping to usher in the development of electronic music, he was also known for his work as an engineer and an architect. Iannis Xenakis: Composer, Architect, Visionary, an exhibition that closes next week (Feb. 4) at the Museum of Contemporary Art (MoCA) Pacific Design Center in Los Angeles, explores Xenakis’ life through his sketches, drawings and musical scores.

There are a number of public programs and concerts this weekend—both officially and unofficially related to the MoCA exhibition—that celebrate his work:

At REDCAT tonight through Sunday, the CEAIT Festival presents the program Iannis Xenakis: Now and Tomorrow. The three concerts will mix instrumental pieces by Xenakis, such as Diamorphoses (1957) and Polytope de Cluny (1972), with new pieces by artists Takuro Mizuta Lippit (dj sniff) and Curtis Roads, who were inspired by his works. Other guest artists include cellist Rohan de Saram, electronic diffusion specialist Daniel Teige and violinist Mark Menzies, a faculty member of The Herb Alpert School of Music at CalArts.

A Forum: Hearing and Seeing Xenakis will also be held before the concerts on Saturday and Sunday at MOCA Grand Avenue. Guest speakers will offer insight and commentary about Xenakis, which will be interspersed with the world-premiere videos of Xenakis interviews and demonstrations. Saturday’s speakers include Roads, Rohan de Saram, James Harley and CalArts faculty member Wolfgang von Schweinitz) and Sunday’s featured guests include Sharon Kanach, Carey Lovelace and CalArts Associate Dean Robert Wannamaker).

On Saturday, Southwest Chamber Music presents the program Iannis Xenakis meets Anne LeBaron. Composer and CalArts faculty member LeBaron’s work for solo harp with ‘activated’ harpist, Hsing, will be premiered by Alison Bjorkedal at the Armory for the Arts in Pasadena. A pre-concert talk begins at 7:30 pm with the performance at 8 pm. Tom Peters will perform works for solo double bass by Iannis Xenakis (Theraps) and Vu Nhat Than (2t for Tom).