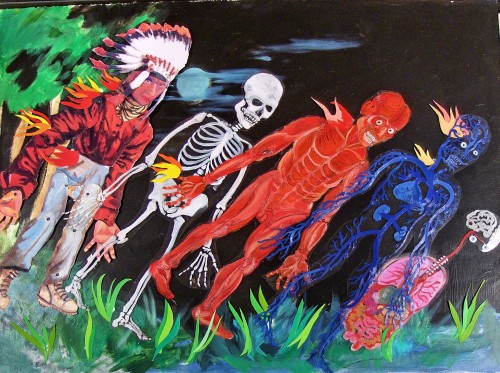 There will be more than a dozen films screened, including:

Her work includes collage, hand-painted films and puppetry on 16mm, and while other filmmakers have worked with those materials, writer Max Goldberg explains in a 2009 Cinema Scope magazine article how Colburn moves beyond the typical mashup:

What makes Colburn’s collage-animations remarkable is that they do not stop with juxtaposition. Whether comic, horrific or, in the case of her latest work, epic, the films present complex circuits of repetition which deny any hope for easy catharsis. In Skelehellavision, for instance, the reiterations of the skeleton motif come to seem an act of demonic possession. The fanaticism of Colburn’s process is both the condition and consequence of her inexorable subjects. This willingness to risk total exhaustion strikes me, above all, as brave.