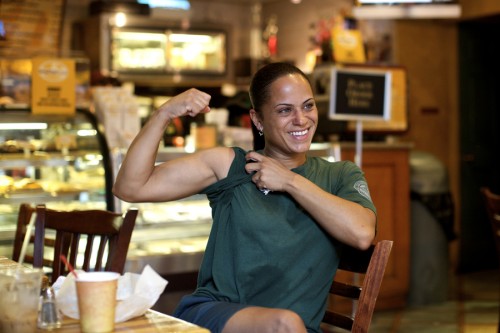 For more than two years, writer and CalArts alumna Lisa Dowda (Critical Studies MFA 2004) and photographer Liza Ligon have been gathering material for a photo book website Chasing Sanitation by following, documenting and interviewing a number of New York City’s sanitation workers who keep the city streets clean. The site provides another perspective on some of the city’s most unsung heroes, documenting their lives both on the clock and after hours.

This is New York’s Strongest, a narrative and photo exhibit based on the project, closes on Sunday in New York.

Dowda told The New York Times recently why this project and why this subject:

One late night in 2008, Lisa Dowda was waiting on an empty Brooklyn street for a bus home to Sunset Park. The bus never came, but a sanitation worker — one of the 7,899 “San Men” who keep New York City’s streets clean — stopped emptying baskets to check in on her and make sure she was O.K. and knew her way.

‘I had never even noticed sanitation workers before,’ said Ms. Dowda, a writer who had recently moved from Los Angeles. While uncollected piles of snow or garbage do get noticed, the people who clear the streets day in and day out remain largely invisible, she said. ‘The work they do is not getting seen, and nobody ever stops to think about the person behind it, what he may be thinking.’