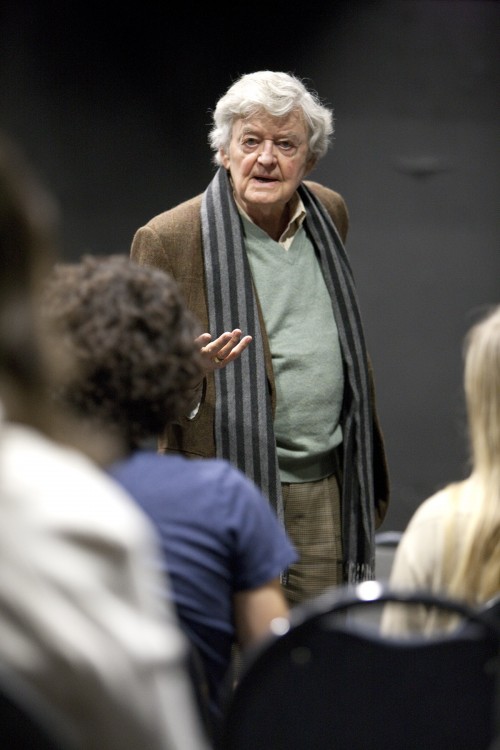 “I’ve been hunting for the key to acting my whole life,” said Emmy- and Tony-winning actor Hal Holbrook to CalArts School of Theater students last week, reminding them that reaching success in their craft can be a long and slow process.

The veteran actor, 86, was at the Institute working with students and crew involved in the upcoming production of Romeo and Juliet, directed by Derek Magyar, a CalArts alum (Theater BFA 03) and friend of Holbrook’s. The two had previously worked together in the 2010 film Flying Lessons, with Magyar directing and Holbrook starring alongside Maggie Grace, Cary Elwes, Christine Lahti and Jonathan Tucker.

The actor, most recognized for his portrayals of Mark Twain on stage and screen, skipped the standard lecture-then-question format and jumped right into the Q&A with students, eager to listen and provide guidance.

“How do you tackle the language of Shakespeare?” was the first question from the audience of mostly CalArts actors. “To me Shakespeare is the ultimate job, great experience for an actor.” (He should know, playing Shylock, King Lear and a number of the Bard’s other roles onstage.)

“Story notes are important in Shakespeare. Footnotes are important,” he said. “You need to know how to make the meaning clear with [the text’s] obscure references and phrases.” He also stressed the importance of a variorum (an edition that collates various editions of a work) when learning Shakespeare’s plays.

When asked about how he got his start and how he managed such longevity in such a fickle business, Holbrook was straight with the audience: “It was luck and hard work. Nothing meant as much to me as acting.”

He talked about getting into acting because he flunked algebra his senior year at the Culver Military Academy in Indiana, and needed another class to graduate. A friend told him about the dramatics class, but “I thought they were all a little weird.” He joined anyway, and after his first role at the military academy in a George M. Cohan play, he knew he was hooked. “People were listening to me and it meant so much.”

Holbrook regaled the students at CalArts with stories about studying under Uta Hagen and meeting fellow classmate and friend Charles Nelson Reilly in that class, and later working with actors such as his wife Dixie Carter, who died last year, and a young Sean Penn, who would later direct him in an Oscar-nominated performance in Into the Wild.

After more than 60 years in the business, Holbrook shows no signs of slowing down. He just completed a role in the film Water for Elephants, and his next film Savannah is in pre-production. He may play Friar Laurence in Magyar’s production of Romeo and Juliet if it moves to the Broad Stage in Santa Monica later this year.

“I feel like I’m just starting to learn how to act.”