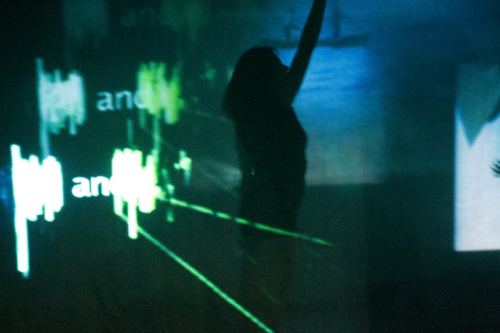 One of the scheduled pieces (at 11:30 am) is In one ear…and in the other—Iteration #2, developed by interdisciplinary artist and CalArts alumna Carole Kim (Film/Video MFA 03). The sound-driven project explores left and right channel aural compositions by a variety of visual, literary and musical artists.

In a previous iteration, the Kim performed the piece at the Holter Museum of Art in Helena, MT. Here’s how the museum described Kim’s work:

Discussion regarding observations of contemporary life and decreased attention span (“in one ear and OUT the other”) is probably familiar territory for most of us given the amount of information we are asked to process at any given time.  In lieu of considering making sense of a barrage of stimuli, “In one ear…” sets out to explore the nature of comprehending simultaneous input in a reductive, focused manner: one input for one ear, another for the other.

Kim is interested in the process of how we engage with and try to make sense of these competing sources. Is it a dialogue in the brain?  Or does the brain simply oscillate between the two and process them separately? The corresponding visuals will be responsive to the soundscape and projected onto different layers of translucent scrim.

For the ArtTalk festival, the project will be “unplugged.” Stripped of its visuals and entirely acoustic, it will feature the writings and voices of several CalArts faculty and alumni, including Critical Studies faculty members Douglas Kearney (Critical Studies MFA 04) and Mady Schutzman and the School of Theater’s Head of Writing for Performance Alice Tuan.