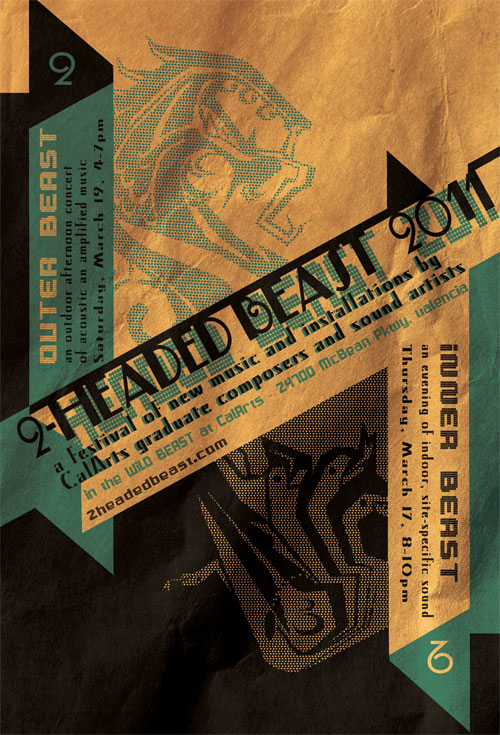 After its debut  last April, the 2-HEADED BEAST 2011, a two-concert new music festival, awakens from hibernation this Thursday and Saturday (March 17 and 19). The concerts will take place in and around The Wild Beast pavilion and The S. Mark Taper Foundation Courtyard and will showcase original compositions and installations by CalArts graduate composers and sound artists.

The concerts showcase a variety of styles, stretching from experimental music and sound installations to jazz, rock, and free-improv. “There’s a really wide variety of music being made by the grad students at CalArts, and it’s really great to present so much of it in an indoor/outdoor event. When we put together the piece submissions, it felt like making a really varied mixtape,” says composer and one of the concert organizers Colin Wambsgans (Music MFA 11).

On March 17, the INNER BEAST will feature an evening of indoor, site-speciﬁc sound pieces. The Wild Beast will be transformed into a musical museum, with simultaneous sound events distributed throughout the space.

“The Wild Beast is big and open, and doesn’t have set seating. But it does have strange nooks and crannies,” says Wambsgans. “The idea really is to treat the space more like a visual art space than a traditional concert hall. People can go into The Beast and have their ears draw them to any one of the pieces, like their eyes would in a gallery.”

Wambsgans says that some of the 13 various pieces on the program will require the middle of the space for individual performances at specific times. “We’ll have a schedule and a map so people can know what they’re seeing and hearing.”

Among the many students featured on the program is composer Adam Florin (Music MFA 11), who will present an installation in the INNER BEAST. “My installation lets the audience navigate the semantic space of the public internet with just their cellphones and their ears.”

The OUTER BEAST, a 3-hour outdoor afternoon concert of acoustic and ampliﬁed music, kicks off on Saturday at 4 pm and will feature more than 17 composers and sound artists. The Wild Beastʼs door will be opened, transforming the space into an open-air amphitheater. The festival-like atmosphere will expand out to the S. Mark Taper Foundation Courtyard and surrounding area.

Performer/Composer Greg Zilboorg (Music MFA 11) is excited to bring his 17-member afrobeat band, Sogo Takeover, to the stage of the OUTER BEAST. “The ensemble is about the power people have when they work together,” he says. “It’s a joyful thing.”

The ﬁrst annual 2-HEADED BEAST festival took place in 2010, just after the Wild Beast was constructed. “If it’s half of what it was last year, it’s going to be a really good time with some great music,” says Wambsgans, who has a brass band composition on the OUTER BEAST program.