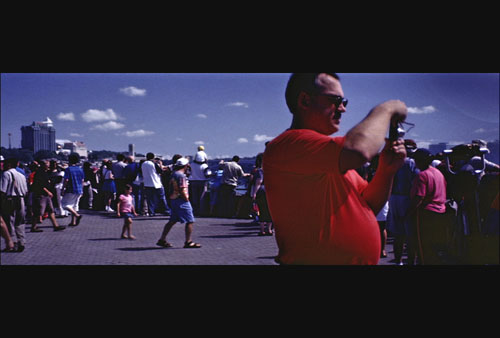 Image: 'View of the Falls from the Canadian Side' (2006) by John Price

The Structuring Strategies class and screening series welcomes independent film curator Irina Leimbacher, who brings a slate of short, experimental films by artists from or living in Canada to CalArts tonight.

The films span four decades of Canadian experimental cinema, from Migration (1969, 11 mins, B&W, 16mm) by David Rimmer to Trees of Syntax, Leaves of Axis by Daichi Saito (2009, 10 mins, color, 35mm). The works on the program both visually and viscerally engage the natural world.

In her curatorial notes, Leimbacher writes:

They include photograms of natural objects as well as a reprise of the first filmed images ever shot in Canada and range from quiet and slow contemplations to multi-layered and optically printed frenzies. While some investigate Canadian landscapes with intensity and proximity, others explore the animal or the animated with ironic distance.  With passion, intensity and humor, film artists David Rimmer, Ellie Epp, Richard Kerr, John Price, Izabella Pruska-Oldenhof, Daichi Saito, and Emily Vey Duke, and Cooper Battersby offer us provocative visions of this land they call home.

Leimbacher, who teaches film studies at Keene State College in New Hampshire, was invited by the CFMDC (Canadian Filmmakers Distribution Centre) to survey their more than 3,000-item collection of films and videos to create programs for both domestic and international presentation as part of CFMDC’s newly launched program: Avant-Garde Canada; Curating The CFMDC Collection.