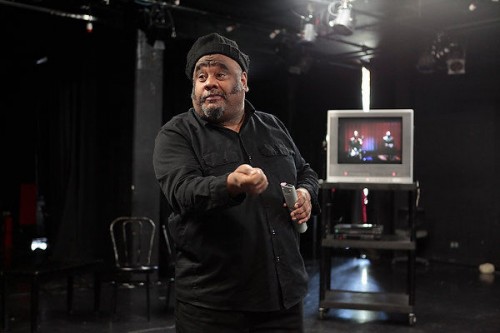 “You have no idea how crazy your school is,” said singer-songwriter-playwright Stew to a roomful of CalArts School of Theater students earlier this month. “[Theater Dean] Travis Preston brought in a rock band to teach theater.”

But it’s not that crazy considering that Stew, and his longtime collaborator Heidi Rodewald, have more than 30 years experience each, performing on stage, first gaining notoriety in the 1990s for fronting the influential LA-based band The Negro Problem. They later garnered even greater attention for creating the musical Passing Strange—which won Stew the 2008 Tony award for Best Book of a Musical.

Stew and Heidi were in the midst of a visiting artist residency at the CalArts Center for New Performance, working with students on their two recent commissions from the Oregon Shakespeare Festival and the New York Public Theater. At the all-school presentation, they discussed the “nexus where musical theater and rock can meet,” citing influential musicals such as Hair, Spring Awakening and American Idiot.

They talked candidly about the challenges of being musicians who wanted produce a theatrical work. Passing Strange was developed at the Sundance Institute Theatre Lab in 2004 and 2005, and had productions at Berkeley Rep and off-Broadway before opening on Broadway in 2008. Director Spike Lee filmed the final show of the musical’s run on Broadway as a documentary, premiering the film in 2009.

“We’re not from the theater world,” said Rodewald, “but we worked for years in the music business, so we learned to question everything and stuck with what we knew.” She noted that it also helped “not paying attention to the way it’s supposed to be done.”

Stew shared lessons learned from putting a production on Broadway: “When there’s giant money, it affects how things are done. There are producers who infantalize the audience, and want to ‘protect’ these people from art.”

At the end of the session, which was interspersed with clips from Spike Lee’s film, Stew left the students with three secrets to bringing a play to Broadway: