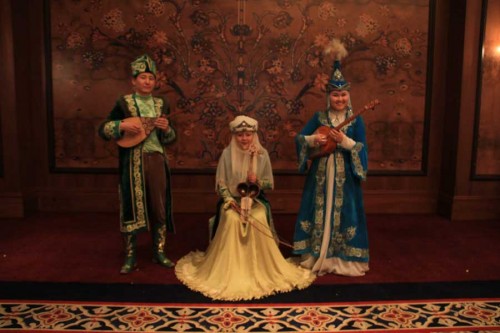 Musicians from Sazgen Sazy, an ethnographic folk orchestra from Kazakhstan, in traditional garb.

After three years in the making, The Silent Steppe Cantata is set to debut in Almaty, Kazakhstan, on Friday (March 25) in the city’s newly restored Zhambyl State Philharmonic Hall. With music composed by CalArts faculty member Anne LeBaron, the work offers a “large-scale sonic portrait of Central Asia and Kazakhstan.”

[It’s an] an ancient tale of mythological proportions, depicting the people of Central Asia as originating from the sun; the story of how they prevailed despite horrific and volatile episodes in their history; an imagined future that looks forward to a peaceful, developed region while retaining the pursuit of honor within the area’s cultural, anthropological and ethnographic context. From a more universally relevant point of view: as the drama unfolds through the medium of the children’s choir, orchestra and soloist, the Cantata emphasizes that the Child—a heroic figure—strives for the creation of a just, peaceful and dynamic society by bringing together the existential relationship between the world and the audience.

Performed in English, Kazakh and Russian, The Silent Steppe Cantata will showcase the talents of a number of CalArts alumni and students involved in the project including the noted Kazakh-American tenor Timur Bekbosunov (Music MFA 08) and filmmaker Sandra Powers (Film/Video MFA 09), who crafted a documentary about the Cantata project (and will be screened preceding the premiere). Also working in Kazakhstan this week to support the project are Daniel Corral (Music MFA 07), LeBaron’s assistant, and third-year BFA Art student Eugene Moon, Powers’ assistant.

The bilateral project was made possible through grants and support by organizations in both countries, including CalArts, the Department of Cultural Affairs of the city of Los Angeles, CEC ArtsLink of New York, Art of Opera Foundation, the Center for Cultural Innovation, the city of Almaty and the Embassy of Kazakhstan in the United States.

LeBaron writes in an email: “We believe that it is politically, economically, and artistically powerful, and responsible, to create new and lasting relationships among diverse cultures in the world, and to promote peaceful dialogues among those cultures. The need for such dialogue through the artistic exchange of ideas is more urgent than ever, and The Silent Steppe Cantata project and its artists are thrilled to share their peaceful vision with the Republic of Kazakhstan and eventually, with the United States.”

Excerpts from The Silent Steppe Cantata: