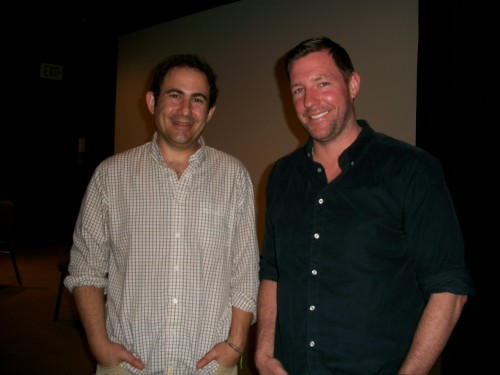 On Thursday (March 24), writer-director-actor Edward Burns’ latest film Nice Guy Johnny was screened in the Bijou Theater for CalArts students, and was immediately followed by a Q&A with Burns, who was at the Institute last week as part of the Film Directing Program’s Guest Artist Workshop.

The workshop’s host, filmmaker and CalArts faculty member Jon Reiss, asked Burns about his auspicious beginnings in the film business. (Burns made a splash when his first film, The Brothers McMullen, won the 1995 Grand Jury Prize at Sundance.)

“McMullen was only supposed to be a calling card for me. I was rejected by everything, and I was just hoping to get an agent with the film,” Burns said. “But then it gets into Sundance, and I’m the sh*t for a second there,” he adds. “I’m not the sh*t anymore, but I love doing this.”

“This” refers to Burns’ adherence to a decidedly indie bent when it comes to making work, usually writing, directing, producing and acting in his lower-budget films. He’s also tried alternative distribution practices for his films, releasing Purple Violets (2007) exclusively on iTunes, and The Lynch Pin series of short films online only.

A self-described “Woody Allen nut” usually crafts plots that revolve around ensemble stories. “I’m a believer in a well-structured screenplay and will outline for four to six weeks before writing.”

Nice Guy Johnny, which debuted last year at the Tribeca Film Festival before heading to DVD, was made for $25,000 using a three-man crew, unknown actors and without line-items such as hair, makeup and wardrobe. The film was shot over the course of three months in and around Long Island and the Hamptons.

The film focuses on Johnny who’s about to give up his talk radio dream job for a career in the cardboard industry, just to please his fiancée. His Uncle Terry is determined to turn a Hamptons weekend into an eye-opening fling for his nephew. Johnny’s not interested—until he meets Brooke, who challenges him to make the toughest decision of is life.

Burns provided advice on ways to tell stories on a limited budget. “Nothing’s preventing you from making a feature film now…[with advances in] digital filmmaking, a camera is all you need.

“It’s about calling in your favors, using friends and family,” he said. “I used my parents’ house for Oakland, I used the Hamptons for Napa, and I used my music engineer’s studio as the radio station in Oakland,” he said. “I didn’t pay the [three-person crew], but we’re all producers.

“And unknown actors invigorated the film set. Filmmaking is about collaboration. I like it when actors rewrite my stuff.”

When a student asked about the best qualities in a director, Burns reiterated the collaborative nature of the medium. “It’s a willingness to collaborate and listen, recognize that compromise is not a dirty word. At this level of filmmaking it’s all about compromise.”