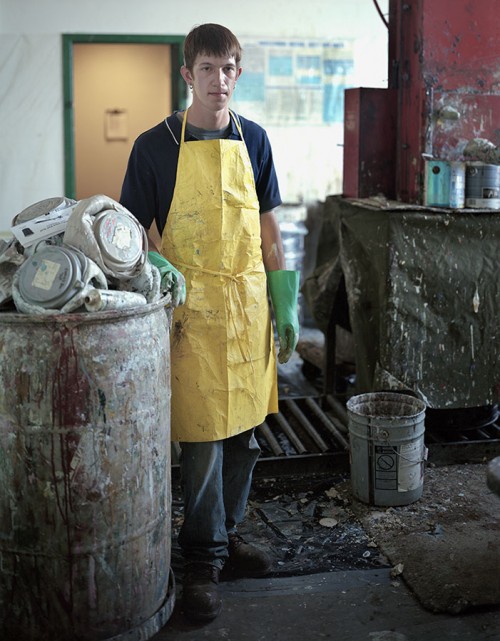 Gina Dabrowski (Art MFA 91), was awarded the 2010 McKnight Artist Fellowship for Photographers to continue an examination of the big business of trash and the evolution of landfills from the open pit dumps of the 1970s.

This is Dabrowski’s second McKnight; her first was awarded in 2000-01, allowing her to document the social space and architecture of bars and clubs. But her photos were usually made when the venues were empty. “I wanted to understand the spaces without looking at people.”

Photographing bars and clubs in Beijing, China, lit the kindling for her current project. Observing the city’s huge population, Dabrowski was struck by how little garbage was visible in the streets. This absence of trash sparked her curiosity, giving rise to the Sanitary Landfills aka dumps project.

While growing up in Minnesota, Dabrowski accompanied her father to scavenge and take scrap metal from dumps in and around Minneapolis as a way to earn extra money. “Now it’s illegal to scavenge. Corporations and the government are now running the landfills. It’s a highly engineered operation,” she says.

She began the project photographing a Michigan landfill and started familiarizing herself with the processes involved, including the use of plastic liners, leachate ponds, landfill cells to keep materials separated and water circulation to dispose of trash and other unwanted items. Gone are the days of direct dumping onto a plot of land and then moving on to another landfill.

Dabrowski’s current focus is on a dozen landfills in greater Minneapolis, particularly the Crow Wing County Landfill in Brainerd, located just north of the city. “I’m using Brainerd as a microcosm for other landfills,” she says.

Her portfolio of large-format (Type C prints) doesn’t have an environmentalist agenda. For Dabrowski, it’s about the documenting areas that are shielded from public view. “I like to photograph something that’s not easily accessible.

“It’s really not about the objects [at the dumps]. It’s more about documenting personal stories of the people who work there or drop off items.”

Dabrowski’s currently on sabbatical from her teaching position at St. Catherine University in St. Paul, Minn., to teach advanced studio lighting at CalArts’ School of Art and preparing for an artist lecture in June at the Walker Art Center as part of the McKnight Fellowship.

The photos included in this post represent the beginning of the Sanitary Landfills aka dumps project to Dabrowski’s current work for the McKnight Fellowship.