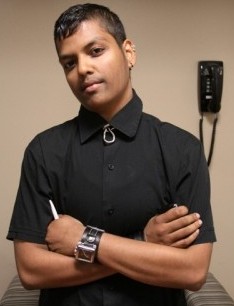 Winners were announced earlier this week for the 49th Annual Ann Arbor Film Festival (March 22-27) in Michigan. A number of films by CalArtians took home prizes, including recent graduate Natasha Mendonca’s film Jan Villa—which captured the Ken Burns Award for Best of the Festival. This marks Mendonca’s second major award for the film, having won one of three Tiger awards at The International Film Festival Rotterdam 2011 earlier this year.

The experimental film is an examination of her native Bombay, after the monsoonal floods of 2005 devastated her city. We did a quick Q&A with Mendonca (Film/Video MFA 10) via email and asked about her influences and any festival advice for current CalArts students.

24700: What films or filmmakers inspired or influenced you when making Jan Villa?

[Alpert Award Winner] Su Friedrich, [CalArts faculty member] Betzy Bromberg and [fellow CalArts alumna] Deborah Stratman were big influences on me personally. My classmates at CalArts—their efforts no matter how different from mine—influenced me. Alice Fulton’s fractal poems and the neo-realism of Iranian cinema. But while shooting and editing, all influences were forgotten and instinct kicked into my process.

24700: What festival advice have you for student filmmakers at CalArts who are just finishing their films?

Keep the faith and send it out to many many places. Ask for waivers and try to not pay entry fees… blame the economy. I received only rejections in the beginning and continue to receive them even today. Self-distribution must be a patient and persistent effort. It’s like winning the lottery. Someone I know once said, ‘Keep the bar low and if you get into two good festivals of your choice that is good enough, I guess.’

Up next for the New York-based filmmaker is her first experimental feature film about a transgender sex worker who meets a gender-ambiguous rickshaw driver on a muggy night in Bombay. Mendonca leaves for India in June.

In addition to Mendonca’s win, four other films by CalArtians were awarded prizes at the Ann Arbor Film Festival: