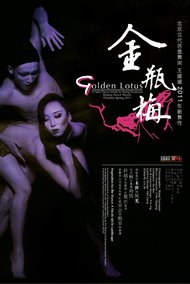 Wang is a sought-after choreographer in China, whose body of work includes the staging of dances for the handover of Hong Kong in 1997 and the Olympic Opening Ceremonies in Beijing in 2008. She co-founded Beijing Contemporary Dance Theater in late 2008, effectively creating the first contemporary ballet troupe in China.

Producing and developing the Ming Dynasty-era work in China was no small feat: The book has been banned in the country since 1687 for its graphic sexual content as well as its critique of government excess and corruption.

In a recent article, The New York Times described the secretive process for the production’s dress rehearsal, held in a locked and guarded theater complex, opened only to those guests who possessed a printed invitation. The Times also explained the company’s risks incurred by its undertaking of Jin Ping Mei:

Creating a production that cannot be performed in China proper, at least as it is currently titled, might seem a questionable strategy for a fledgling private dance company that depends on sponsorship for its existence, and that cites as its goals the promotion of modern dance in China and of Chinese culture overseas. It is, however, in keeping with the fierce sense of artistic freedom of the dance troupe’s director, Wang Yuanyuan, and her strong belief in the company’s obligation to make socially relevant works.

At the start of the rehearsal, Ms. Wang, who also choreographed the work, acknowledged the production’s peculiar status.

‘It is unfortunate that we won’t be able to perform it here,’ she told the invited audience. ‘But if you have any suggestions for improving it, please give them to me.’

And with that, the house lights dimmed, the music began with an ominous bell chime, and a black and gold curtain rose to reveal a jumble of seemingly nude dancers linked together in a pile of flesh. At the center of this dances the antihero of ‘Jin Ping Mei, ‘the insatiable and corrupt Ximen Qing.’

While the undertaking of such a risque piece is daring, Wang isn’t hedging her bets against the Chinese government. In a Telegraph (U.K.) article, she says:

‘We have not applied for a performance permit in mainland China for a simple reason: I do not like chasing after trouble. Besides, 80 per cent of our shows are now staged abroad. We do not rely on any government sponsorship, so we are not limited,’ she said.

Though it may never make it to the Chinese mainland, Jin Ping Mei premiered in Hong Kong on March 25 to a sell-out crowd.